I mentioned in the “Special Topics” presentation on “Great Comets” that such objects come by about once a decade, on average. Comet NEOWISE C/2020 F3, which appeared back in July, could perhaps be considered a borderline “Great” comet, but prior to that, the last “Great Comet” for those of us in the northern hemisphere was Comet Hale-Bopp C/1995 O1, which was at its best during early 1997, well over two decades ago. The southern hemisphere, meanwhile, has had two “Great Comets” during the intervening years, Comet McNaught C/2006 P1 and Comet Lovejoy C/2011 W3 – both of which are either previous or future “Comets of the Week” – and in the unlikely event that Comet PANSTARRS C/2017 K2 – also a previous “Comet of the Week” – happens to become “Great” when it passes through perihelion in late 2022 it will also be exclusively visible from the southern hemisphere around that time. Those of us in the northern hemisphere can perhaps be forgiven for believing we were overdue for a “Great Comet” of our own.

What seemingly offered an excellent chance for a northern hemisphere “Great Comet” was discovered on September 21, 2012, by two amateur astronomers, Vitali Nevski of Belarus and Artyom Novichonok of Russia, who were conducting a survey program with one of the telescopes of the Russia-based International Scientific Optical Network (ISON) located at Kislovodsk, Russia. The comet was about 18th magnitude at the time, however pre-discovery images, including some that dated back almost a full year before the discovery, allowed for an early determination of a valid orbit. This showed that the comet was still fourteen months away from perihelion passage, which would occur at a very small perihelion distance. Excellent viewing geometry for the northern hemisphere after perihelion, including geometry favorable for forward scattering of sunlight, indicated a good potential for a “Great Comet.” The orbit, in fact, bore a superficial resemblance to that of the Great Comet of 1680 – a future “Comet of the Week” – although it appears that there is no connection between the two objects.

Initially, Comet ISON brightened relatively rapidly and was close to 15th magnitude when it was at opposition in early January 2013. From then until the time it disappeared into evening twilight in early June, however, its brightness remained relatively flat, which was not a good sign about a prospective future bright display. Also somewhat ominous was the fact that Comet ISON was a “new” comet making its first visit into the inner solar system from the Oort Cloud, and as discussed in the “Great Comets” “Special Topics” presentation, such objects often tend to underperform compared to initial expectations.

Following conjunction with the sun, Comet ISON began emerging into the morning sky, and was first imaged low in twilight, during mid-August, appearing at around 14th magnitude. It had brightened to 13th magnitude when the first visual observations were made around the beginning of September, and it brightened somewhat steadily from that point, being close to magnitude 9½ and exhibiting a bright telescopic tail a few tens of arcminutes long by early November. It soon became apparent, however, that the brightness increase was solely due to the decreased distance from Earth, meaning that there had been no increase in the comet’s intrinsic activity during that time. (To hearken back to the “Special Topics” presentation on “Great Comets,” Comet ISON’s value of “n” was essentially zero.) The prospects for a “Great Comet” display from Comet ISON were looking less and less likely . . . 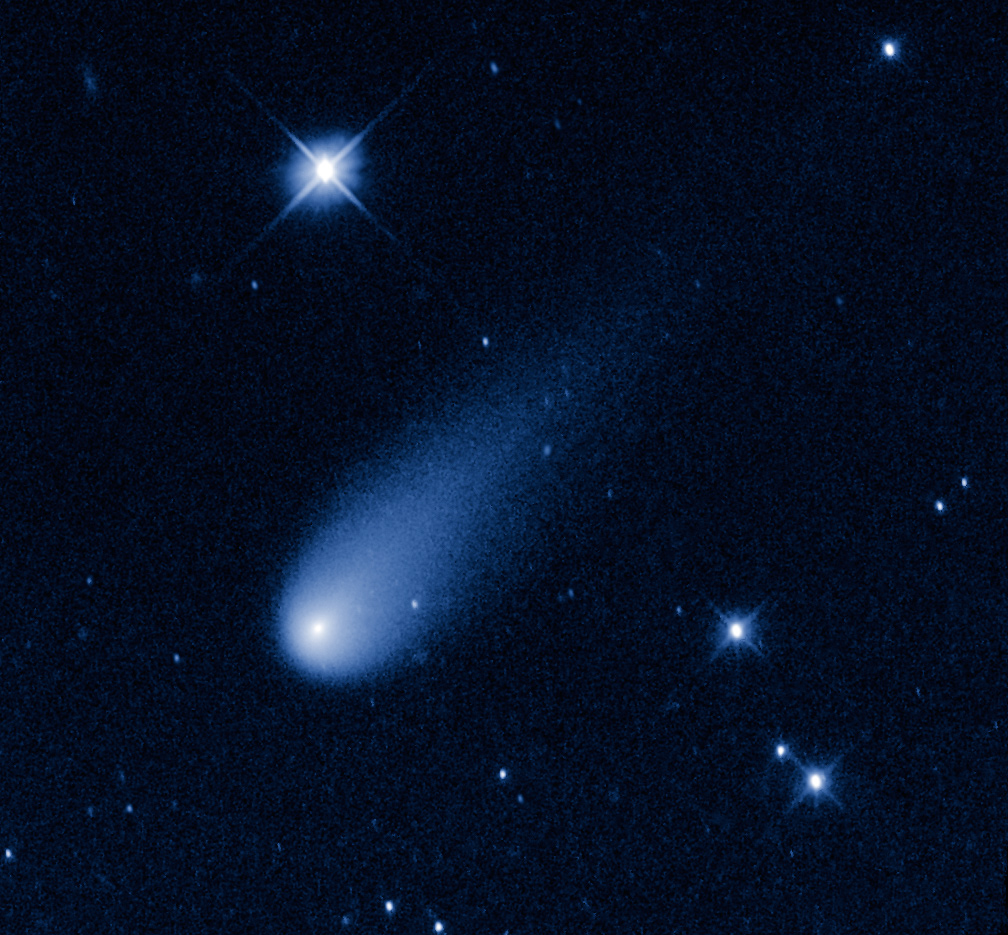 Around the end of the second week of November Comet ISON started to undergo some outbursts, to about 5th magnitude, and although it thereafter faded slightly from this, by about November 21 – just one week away from perihelion passage – it had brightened back to 4th magnitude. By this time, however, its elongation was getting to be quite low, and it disappeared into the dawn sky within a few days.

While Comet ISON was not observable from the ground on the day of perihelion, November 28 – which happened to be Thanksgiving Day here in the U.S. – it was readily detectable in the LASCO coronagraphs aboard the SOlar and Heliospheric Observatory (SOHO) spacecraft. Initially, it was rather bright, about magnitude -2, in the C3 field-of-view, and then in C2, but it was also clearly starting to fade by the time it disappeared behind the C2 occulting disk. When it reappeared from behind the occulting disk it was nothing more than a smeared-out trail of debris – it had clearly disintegrated as it passed through perihelion. A dusty remnant remained within C3 for the next three days, and then for another three days it remained detectable with one of the cameras aboard the STEREO-A spacecraft, but there was clearly no “comet” left to speak of.

The only question that remained was whether or not this remnant would still be visible once it had traveled far enough away from the sun to be accessible in the pre-dawn sky. Attempts to observe it became possible after the first week of December, but nothing was ever detected, and even the Hubble Space Telescope failed to detect anything on December 18. Whatever was left of Comet ISON had completely evaporated.

While clearly a major disappointment as far as any dramatic display was concerned, Comet ISON was nevertheless an intensely studied comet scientifically, and in fact, it presented the best opportunity to date to study a fresh comet making its first visit in from the Oort Cloud. While inbound to perihelion it passed close to both Mars (0.07 AU) and Mercury (0.24 AU), and while doing so it was imaged by spacecraft in orbit (Mars Reconnaissance Orbiter (MRO) around Mars, and MESSENGER around Mercury), becoming the first comet ever to be observed from the vicinity of another planet. Data from MRO suggests that the comet’s nucleus was probably no more than 800 meters in diameter, quite a bit smaller than initially believed, and this small size undoubtedly played a significant role in the comet’s failure to survive perihelion.

For those of us in the northern hemisphere, the wait for our next “Great Comet” continued for another 6½ years before finally ending earlier this year. Hopefully, we will not have to wait another two decades before another one . . .

Next This Week in History: November 22-28