Artemis I will send a rocket without a crew on a monthlong journey around the Moon. The program aims to increase women’s participation in space exploration – 30% of its engineers are women. In addition, the Artemis I mission will carry two mannequins designed to study the effects of radiation on women’s bodies so that NASA can learn how to protect female astronauts better.

Female astronauts are currently less likely to be selected for missions than men because their bodies tend to hit NASA’s maximum acceptable threshold of radiation earlier. NASA expects to bring the first woman and person of color to the Moon on Artemis III sometime after 2024.

As a scholar of Greek mythology, I find the name of the mission quite evocative: The Greeks and Romans associated Artemis with the Moon, and she has also become a modern-day feminist icon.

Artemis was a major deity in ancient Greece, worshiped at least as early as the beginning of the first millennium B.C., or even earlier. She was the daughter of Zeus, the chief god of the Olympians, who ruled the world from the summit of Mount Olympus. She was also the twin sister of Apollo, the god of the Sun and oracles.

Artemis was a virgin goddess of the wilderness and hunting. Her independence and strength have long inspired women in a wide range of activities. For example, in a poem titled “Artemis,” author Allison Eir Jenks writes: “I’m no longer your god-mother … your chef, your bus-stop, your therapist, your junk drawer,” emphasizing women’s freedom and autonomy.

As the goddess of animals and the wilderness, Artemis has also inspired environmental conservancy programs, in which the goddess is viewed as an example of a woman exercising her power by caring for the planet.

However, while the Greek Artemis was strong and courageous, she wasn’t always kind and caring, even toward women. Her rashness was used to explain a woman’s sudden death, especially while giving birth. This aspect of the goddess has faded away with time. With the rise of feminism, Artemis has become an icon of feminine power and self-reliance.

NASA has a long history of naming its missions after mythological figures. Starting in the 1950s, many rockets and launch systems were named after Greek sky deities, like Atlas and Saturn, whose Greek name is Cronos.

Atlas and Saturn weren’t just gods, they were Titans. In Greek mythology, Titans represent the untamed, primordial forces of nature, and so they evoke the prodigious vastness of space exploration. Although the Titans were known for their immense strength and power, they were also rebellious and dangerous and were eventually defeated by the Olympians, who represent civilization in Greek mythology.

Following the advent of human space flight, NASA began naming missions after the children of Zeus who are associated with the sky. The Mercury program, active from 1958 to 1963, was named after Hermes’ Roman counterpart, the messenger god who flies between Olympus, Earth, and the underworld with his winged sandals.

Starting in 1963, the three-year-long Gemini program featured a capsule designed for two astronauts and was named after the twin sons of Zeus – Castor and Pollux, known as the Dioscuri in Greek – who were cast in the stars as the constellation of Gemini. They were regularly represented with a star above their heads in Greek and Roman art.

The Space Shuttle program, which lasted from 1981 to 2011, diverted from mythological monikers, and the names Columbia, Challenger, Discovery, Atlantis, and Endeavour were meant to evoke a spirit of innovation.

With Artemis, NASA is nodding back to the Apollo program, which lasted from 1963 to 1972 and put the first men on the Moon in 1969. Over 50 years later, Artemis will pick up where her twin brother left off, ushering in a more diverse era of human space flight.

Next Hurricane delays launch of Artemis to Nov. 16 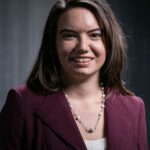 Marie-Claire Beaulieu is an associate professor of Classical Studies at Tufts University. She has received her PhD. from the University of Texas at Austin (2008), and her MA and BA from the Université de Montréal (2003 and 2001). Her major research areas are Greek mythology and digital humanities and she teaches complete sequence of courses on Greek mythology and its later incarnations in medieval, early modern, and contemporary literature and popular culture.

In her publications, Prof. Beaulieu studies the interactions between culture, religion, and the human experience of the natural world. Her book The Sea in the Greek Imagination (University of Pennsylvania Press, 2016) explores the Greek representation of the sea as a cosmological space of transition between the living, the dead, and the gods. She has recently led a team of international scholars in publishing a collection of essays titled A Cultural History of the Sea in Antiquity, part of the broader Cultural History of the Sea series (Bloomsbury, 2021). Her current project, in collaboration with a team of experts from the humanities, computer science, and the biological sciences, is a digital edition of D'Arcy Thompson Glossary of Greek Birds (https://sites.tufts.edu/ancientbirds/). The project leverages technology and science to analyze the significance of birds in Greek mythology.

With the Perseids Project (https://www.perseids.org/), Prof. Beaulieu has engaged in large infrastructure-building initiatives in the digital humanities, designing collaborative editing and annotation software. She has also engaged extensively in interdisciplinary teaching, in particular with the Department of Computer Science, and her classes make frequent use of technology to involve students in the process of research. In general, Prof. Beaulieu is interested in using the digital medium to foster greater engagement with the ancient world through the study of language, art, and culture.