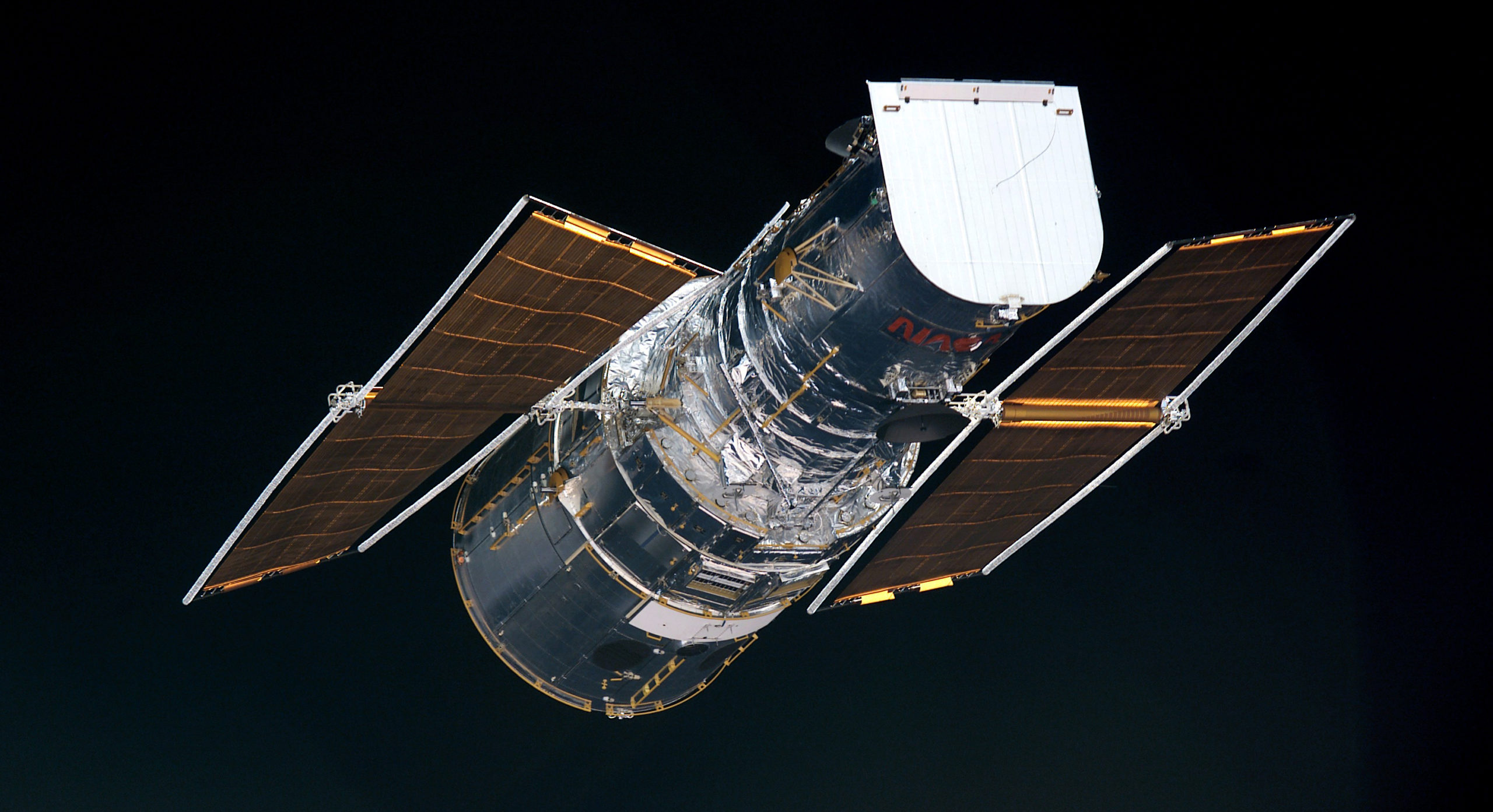 The Hubble Space Telescope marked the 30th anniversary of its deployment, far exceeding its initial expected lifespan of only a single decade. While the scientific operation of the space-based telescope got off to a rocky start, a series of repair missions and upgrade by NASA astronauts have made certain that Hubble has become our vista to the cosmos. Some even consider it the greatest scientific instrument that humanity has ever created.

Good luck with this latest edition of QuizMe which contains 15 questions all about the Hubble Space Telescope. After you finished, we recommend going outside tonight and taking a look up at the night sky.

We published a super-size issue of RocketSTEM commemorating the 25th anniversary in 2015. We certainly are biased, but we think that issue serves as a great research tool for this quiz. The Top 100 Images pictorial remains one of our most-read features even to this day.

Congratulations. Are you a descendent of Edwin Powell Hubble’s family? Keep looking up at the cosmos and being as astounded by it as we are.

The Universe is a vast expanse filled with amazing objects. No one knows everything about it. Not even Neil deGrasse Tyson. Keep looking up at the cosmos and being as amazed by it as we are. 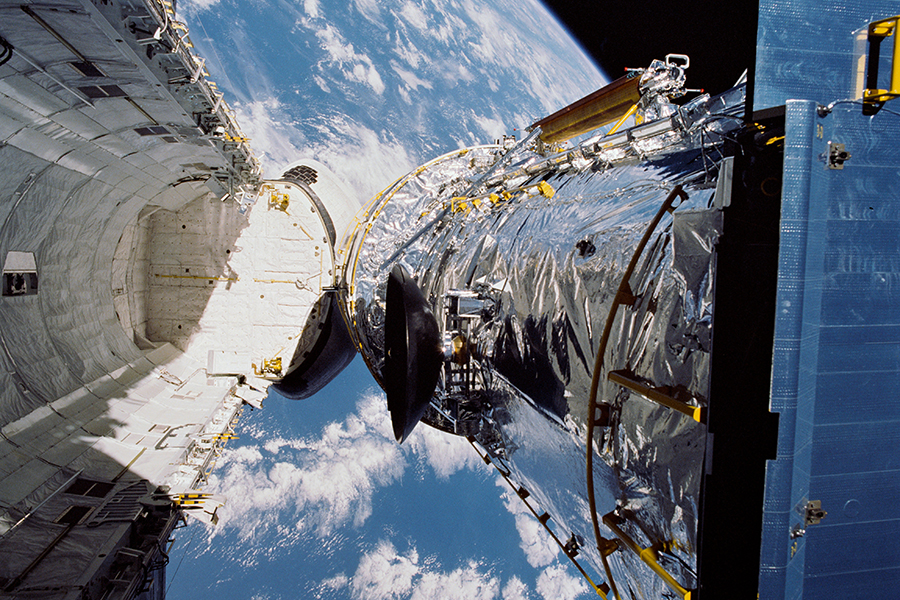 #1. Which Space Shuttle first deployed the Hubble Space Telescope in 1990?

The Hubble Space Telescope was deployed by the crew of the STS-31 mission from Space Shuttle’s Discovery’s cargo bay 332 nautical miles above Earth on April 25, 1990. The Canadian-built remote arm held the huge telescope in position during pre-deployment procedures, which included extension of solar array panels and antennae.

#2. The Pillars of Creation is which image?

These towering tendrils of cosmic dust and gas sit at the heart of the Eagle Nebula (M16). They are part of an active star-forming region within the nebula and hide newborn stars in their wispy columns. The pillars are bathed in the scorching ultraviolet light from a cluster of young stars located just outside the frame. The winds from these stars are slowly eroding the towers of gas and dust.

Stretching roughly 4 to 5 light-years, the Pillars of Creation are a fascinating but relatively small feature of the entire Eagle Nebula, located 7,000 light-years from Earth in the constellation Serpens. With an apparent magnitude of 6, the Eagle Nebula can be spotted through a small telescope and is best viewed during July. A large telescope and optimal viewing conditions are necessary to resolve the Pillars of Creation. 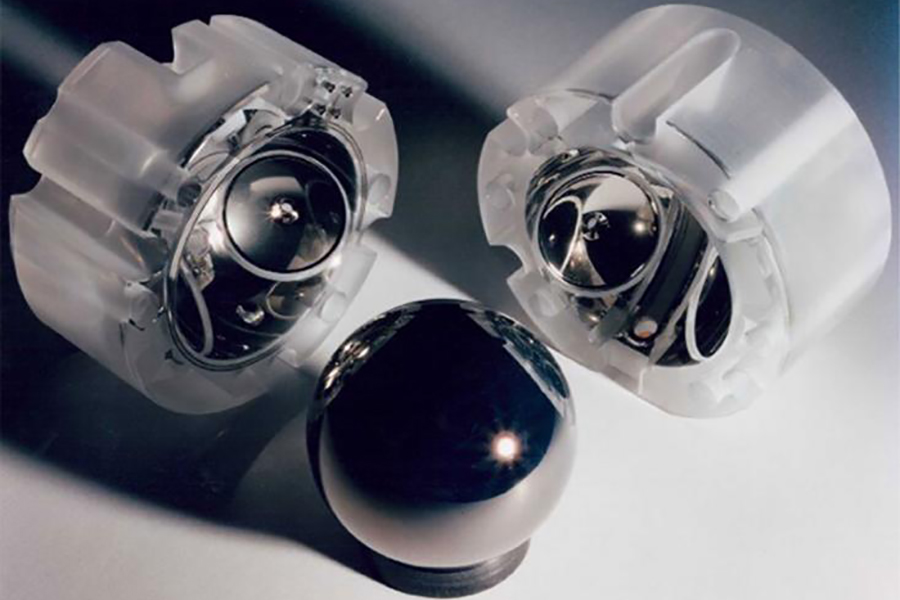 #3. There are how many gyroscopes in Hubble?

Hubble has six gyroscopes, with only three operational at any time. The gyroscopes are needed to help Hubble turn and lock on to new targets. While the preference is for three gyros to be active at all times, Hubble is able to operate in a reduced mode with only one or two working gyroscopes.

#4. Which image is not of the Carina Nebula?

The third image is the most detailed image of the Carina Nebula ever captured. The first image is a gas and dust pillar where new stars are forming within the nebula. The second image is of Trumpler 16, a massive open cluster of luminous stars located within the Carina-Sagittarius Arm of the nebula. 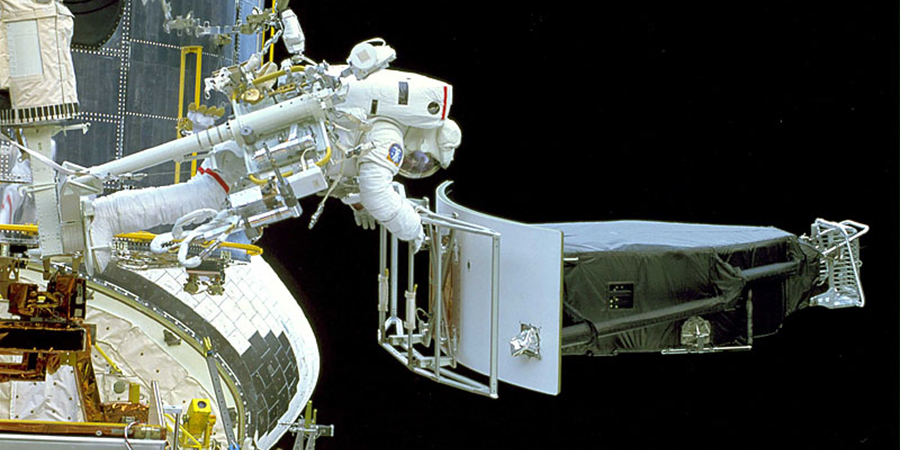 #5. Hubble was initially found to have what flaw upon its activation in space?

Shortly after the Hubble Space Telescope was deployed in 1990, the observatory’s primary mirror was discovered to have an aberration that affected the clarity of the telescope’s early images. Fortunately, Hubble was the first telescope designed to be visited in space by astronauts to perform repairs, replace parts and update its technology with new instruments.

This comparison image of the core of the galaxy M100 shows the dramatic improvement in the Hubble Space Telescope’s view of the universe after the first servicing mission in December 1993. The original view, taken a few days before the servicing mission, is on the left.

#6. Which image is of the Crab Nebula?

The Crab Nebula, the result of a supernova noted by Earth-bound chroniclers in 1054 A.D., is filled with mysterious filaments that are are not only tremendously complex, but appear to have less mass than expelled in the original supernova and a higher speed than expected from a free explosion. The Crab Nebula spans about 10 light-years. In the nebula’s very center lies a pulsar: a neutron star as massive as the Sun but with only the size of a small town. The Crab Pulsar rotates about 30 times each second. 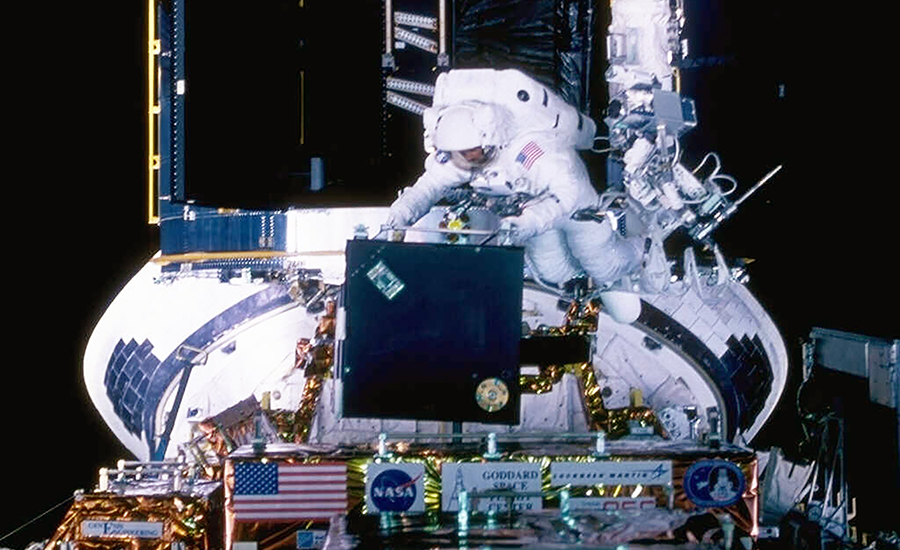 #7. There were how many servicing missions to Hubble?

There have been five astronaut servicing missions to Hubble. The servicing missions corrected the initial faults discovered in Hubble after it was launched into orbit, as well as upgraded scientific instruments and replaced many of the components of the orbiting telescope in order to prolong its mission. The five servicing missions were conducted in December 1993, February 1997, December 1999, March 2002 and May 2009. Without the unique capabilities provided by the Space Shuttle, there are no plans to conduct a sixth servicing mission.

#8. The Helix Nebula is shown in which image?

The Helix is a planetary nebula, the glowing gaseous envelope expelled by a dying, sun-like star. The Helix Nebula resembles a simple doughnut as seen from Earth. But looks can be deceiving. Evidence suggests that it consists of two gaseous disks nearly perpendicular to each other. 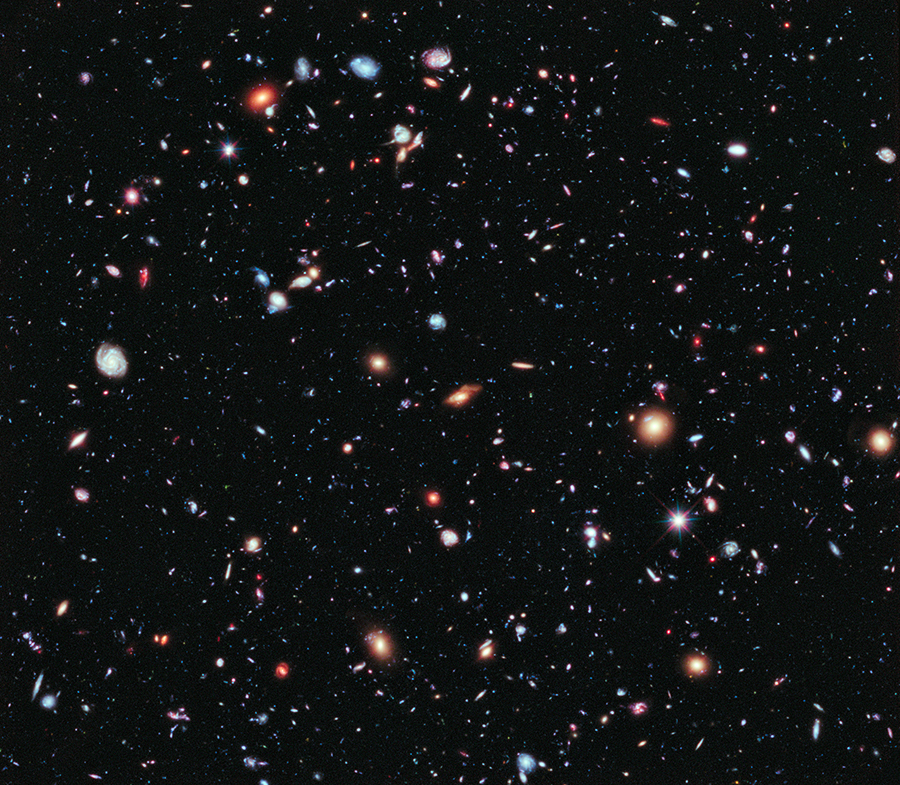 #9. About how many galaxies are visible in the Extreme Deep Field image?

The Hubble eXtreme Deep Field (XDF), combines Hubble observations taken over the past decade of a small patch of sky in the constellation of Fornax. With a total of over two million seconds of exposure time, it is the deepest image of the Universe ever made, combining data from previous images including the Hubble Ultra Deep Field (taken in 2002 and 2003) and Hubble Ultra Deep Field Infrared (2009).

The image covers an area less than a tenth of the width of the full Moon, making it just a 30 millionth of the whole sky. Yet even in this tiny fraction of the sky, the long exposure reveals about 5500 galaxies, some of them so distant that we see them when the Universe was less than 5% of its current age. The Hubble eXtreme Deep Field image also contains several of the most distant objects ever identified.

#10. Which image is of the Orion Nebula?

The Orion Nebula is a picture book of star formation, from the massive, young stars that are shaping the nebula to the pillars of dense gas that may be the homes of budding stars. The Orion Nebula is 1,500 light-years away and is the nearest star-forming region in proximity to Earth. 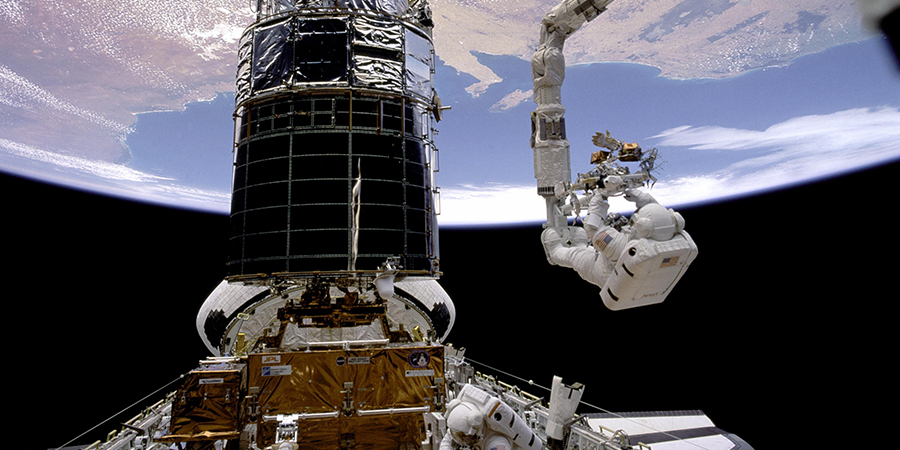 #11. Which astronaut did not fly on a Hubble servicing mission?

Clayton Anderson was chosen to join NASA’s astronaut group in 1998. He launched to the International Space Station aboard the STS-117 on June 8, 2007, and returned to Earth aboard Discovery on November 7, 2007. His 152-day stay onboard the ISS was his only space flight.

#12. Which galaxy pictured is a flocculent spiral?

Star formation is one of the most important processes in shaping the Universe; it plays a pivotal role in the evolution of galaxies and it is also in the earliest stages of star formation that planetary systems first appear. Yet there is still much that astronomers don’t understand, such as how do the properties of stellar nurseries vary according to the composition and density of gas present, and what triggers star formation in the first place? The driving force behind star formation is particularly unclear for a type of galaxy called a flocculent spiral, such as NGC 2841 shown here, which features short spiral arms rather than prominent and well-defined galactic limbs. 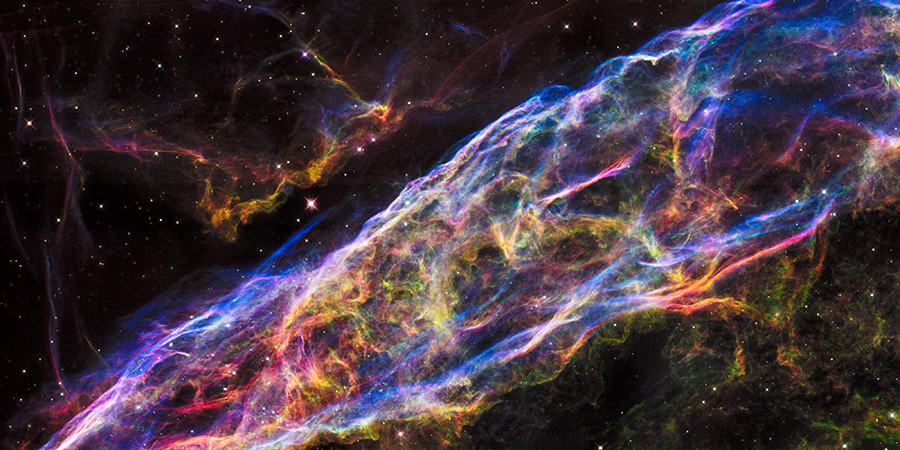 The cameras of the Hubble Space Telescope record light from the universe with special electronic detectors. These detectors produce images of the cosmos not in color, but in shades of black and white. Finished color images are actually combinations of two or more black-and-white exposures to which color has been added during image processing.

The colors in Hubble images, which are assigned for various reasons, aren’t always what we’d see if we were able to visit the imaged objects in a spacecraft. We often use color as a tool, whether it is to enhance an object’s detail or to visualize what ordinarily could never be seen by the human eye.

M92 is a globular cluster of stars located 27,000 light-years from Earth in the constellation Hercules. It was discovered by the German astronomer Johann Elert Bode in 1777.

With an apparent magnitude of 6.3, M92 is one of the brightest globular clusters in the Milky Way and is visible to the naked eye under good observing conditions. It can be most easily spotted during the month of July. The cluster is very tightly packed with stars, containing roughly 330,000 stars in total. 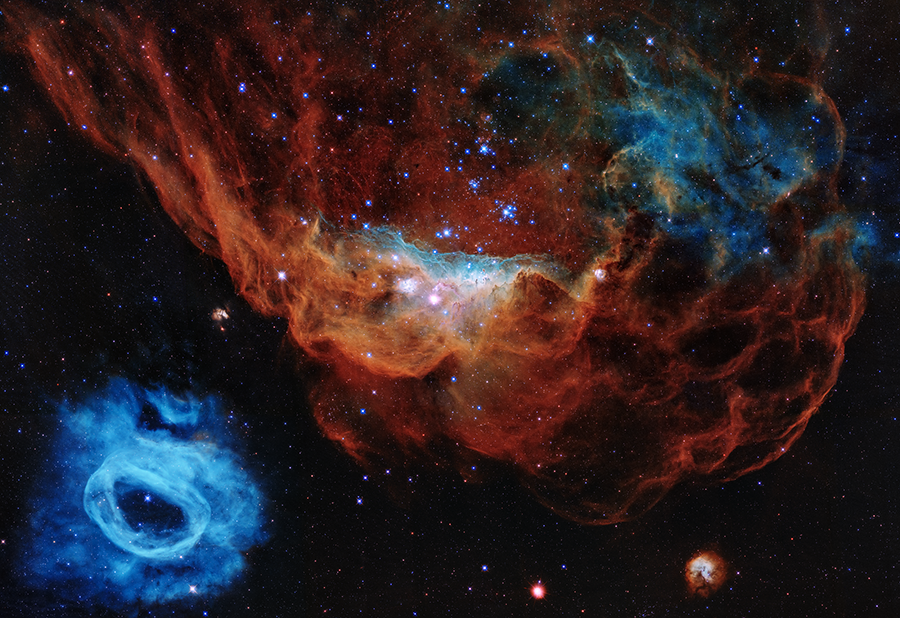 #15. Hubble’s 30th anniversary image is colloquially referred to as what?

In this Hubble portrait, the giant red nebula (NGC 2014) and its smaller blue neighbor (NGC 2020) are part of a vast star-forming region in the Large Magellanic Cloud, a satellite galaxy of the Milky Way, located 163,000 light-years away. The image is nicknamed the “Cosmic Reef,” because it resembles an undersea world.

Previous This Week in History: April 26-May 2

Next Special Topic: Occultations by Asteroids

Chase is the founder of RocketSTEM and serves as the magazine's first managing editor. He previously worked as a reporter/photographer/editor for a variety of Midwestern newspapers for a decade, as well as working as a graphic designer for a handful of professional sports and lifestyle magazines, before stepping away to become a 'certified' Rocket Hobo. He's witnessed a dozen launches in person, and was honored to be one of the last civilians to be allowed aboard Endeavour's cockpit while the Space Shuttle was still running under its own power.