Last week’s topic concerned the asteroids that occupy the so-called “main asteroid belt” between the orbits of Mars and Jupiter. The overwhelming majority of the first several hundred asteroids discovered, and, indeed, a large majority of the asteroids known today, reside in this region. However, as years went by and more and more asteroids kept being discovered, we started to find them in various other regions of the solar system. One of these regions, and which for obvious reasons is of high interest, is the inner solar system in and around the orbit of Earth, and the asteroids here are referred to – again, for obvious reasons – as the “near-Earth asteroids.”

The first-known near-Earth asteroid was discovered in August 1898 and is now known as (433) Eros. It has a rather storied history, and will be the subject of its own “Special Topics” presentation in the near future. The next one was discovered in October 1911 by Johann Palisa at the Vienna Observatory in Austria and was given the number and name of (719) Albert; it had passed 0.21 AU from Earth four weeks before its discovery, but due to a short observing arc an accurate orbit could not be calculated and it was lost until it was re-discovered in May 2000. (It was subsequently identified on photographs taken in 1971, 1988, 1993, 1996, and 1997.)

A third near-Earth asteroid, now known as (887) Alinda, was discovered by Max Wolf at Heidelberg Observatory in Germany in 1918, and a fourth, (1036) Ganymed, was discovered by Walter Baade at Bergedorf Observatory (also in Germany) in 1924. The 1930s saw the discoveries of several notable such asteroids: (1221) Amor, by Eugene Delporte at the Uccle Observatory in Belgium in March 1932; (1862) Apollo, discovered six weeks later by Karl Reinmuth at Heidelberg; (2101) Adonis, discovered by Delporte in February 1936; and (69230) Hermes, discovered by Reinmuth in October 1937. Apollo, which was lost until it was finally recovered in 1973, was the first known asteroid that came to within the orbit of Earth; Hermes, meanwhile, passed just 0.0050 AU (1.9 lunar distances) from Earth two days after discovery, a record known close approach which stood until 1989. It was only followed for four days, and was lost until its re-discovery in October 2003. 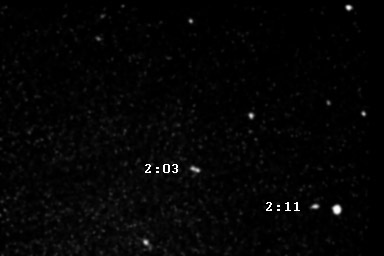 Over the next few decades, various “fast-moving” near-Earth asteroids were occasionally discovered from time to time, almost every one of these receiving a fair amount of attention and fanfare. One of the most interesting such objects was discovered in June 1949 by Baade – now at Palomar Observatory in California – and was soon found to be traveling in an eccentric orbit (e = 0.83) with a perihelion distance of only 0.19 AU, slightly less than half of Mercury’s average distance from the sun. Now known as (1566) Icarus, it has made some distinctly close approaches to Earth since then, including a highly publicized approach of 0.043 AU in June 1968 during which it became the first asteroid to be detected via radar and also started to introduce the concept of an impact threat into the public consciousness.

Starting in the early 1970s, geologist Eugene “Gene” Shoemaker and planetary astronomers Tom Gehrels and Eleanor “Glo” Helin – all somewhat independently of each other – initiated systematic searches for near-Earth asteroids, primarily utilizing the wide-field Schmidt photographic telescopes at Palomar, and before much longer the discovery rate of these objects began to climb rather rapidly. A most dramatic discovery came on January 7, 1976, when Helin discovered the first-known asteroid – now known as (2062) Aten – that has an average distance from the sun less than that of Earth’s orbit and thus an orbital period of less than one year.

The first CCD-based survey program for near-Earth asteroids, called Spacewatch, was initiated by Gehrels in the early 1990s at Kitt Peak National Observatory in Arizona, and the discovery rate of these objects subsequently increased further. Then, the impacts of Comet Shoemaker-Levy 9 – discovered during the course of Shoemaker’s photographic survey program, and which will be a future “Comet of the Week” – into Jupiter in July 1994 emphasized in a major way the threat that near-Earth asteroids (and comets as well) pose to our Earthly civilization and accordingly stimulated a wide public interest in this subject. A special commission chartered by the U.S Congress and chaired by Shoemaker was tasked to find the best ways to address this issue, with the report (which was delivered in 1995) finding that comprehensive survey programs that could accordingly detect the majority of threatening objects well in advance would be a prudent way to proceed.

The first of these comprehensive large-scale survey programs, the LIncon Near-Earth Asteroid Research (LINEAR) program developed by Lincoln Laboratory at the Massachusetts Institute of Technology and utilizing optical sensors developed by the U.S. Air Force, was based at White Sands Missile Range in New Mexico and went on-line in early 1998. Almost immediately the discovery rate of near-Earth asteroids exploded, with several being found every month. Since then various additional survey programs, with improved detection technology, automated motion-detection software, and other capabilities, have come on-line, and today dozens of near-Earth asteroids are discovered every month, most of these being rather small objects typically a few tens of meters in diameter. These various programs are discussed more thoroughly in a future “Special Topic.”

Based upon their orbital characteristics, near-Earth asteroids are generally divided into four classifications. “Amor” asteroids have perihelion distances greater than Earth’s aphelion distance but less than 1.3 AU, while “Apollo” asteroids have perihelion distances interior of Earth’s orbit. A subset of the Apollo asteroids are the “Aten” asteroids, that have orbital periods of less than one year. A further subset of these are the “Atira” asteroids – named after the first confirmed member of the class, (163693) Atira, discovered by LINEAR in February 2003 – that have orbits entirely interior to that of Earth. Because of gravitational perturbations – including, certainly, by Earth – it is possible that an asteroid can shift from one of these classes to another; indeed, (99942) Apophis, which will pass just 31,000 km above Earth’s surface on April 13, 2029, will shift from being an Aten asteroid to an Apollo asteroid in the process.

Near-Earth asteroids are, in general, smaller than their known counterparts in the main asteroid belt. The largest one, (1036) Ganymed, is approximately 35 km in diameter, and the second-largest, (433) Eros, is an oblong object 34 km by 11 km in size. Due to the comprehensive surveys, over 90% of the near-Earth asteroids larger than 1 km in diameter are now believed to have been discovered. As mentioned above, most of the objects being found by surveys today are significantly smaller, on the order of tens to hundreds of meters across.

The primary reason, of course, for the high interest in these objects is the potential threat they pose via impacts, and the “early warning” being provided by their discoveries at this time is a substantial aid in estimating and reducing that threat. This specific topic, including how the threat estimation works, will be a future “Special Topic.” The smaller asteroids that are being found today present their own issues; while they may not present a threat on a global scale, they can still do so on a regional scale, however, their small size makes them difficult to detect unless they are near Earth. The Atira asteroids also present issues, since they usually remain at small solar elongations and are usually only detectable when near aphelion – which even under the best of circumstances must take place at a relatively small elongation. For what it’s worth, at this time the Atira asteroid with the smallest known orbit is 2019 LF6, which has an orbital period of only 151 days, a perihelion just inside Mercury’s orbit and an aphelion just outside Venus’ orbit. Its orbital inclination of 30 degrees makes it slightly easier to detect than it otherwise would be.

With all the near-Earth asteroids that are now known and that are being discovered, close approaches to Earth happen on almost a daily basis, although most of the asteroids involved are quite small and require large telescopes to be detected. Lists of approaching asteroids, both those that are previously known as well as those that have just been discovered, are maintained at, among other places, the Minor Planet Center’s web site. Some of the brighter and/or more notable predicted approaches taking place this year include:

When possible and appropriate, I will attempt to include observations of these – and any bright new discoveries – as exercises for “Ice and Stone 2020.”

A handful of near-Earth asteroids have been visited by spacecraft, beginning with (433) Eros which was orbited by NASA’s Near-Earth Asteroid Rendezvous (NEAR) Shoemaker mission in 2000-01. This mission, and others, including two that are ongoing at this time and more that are planned for the future, will be discussed in future “Special Topics” presentations.