Apply trigonometric ratios to the NASA Mars Helicopter Scout so that flight data such as climb angle and average speed can be calculated given initial flight parameters.

• Slope: The angle the rille wall makes to the horizontal.

• Above Ground Level (AGL): The altitude as measured from the local area.

• Altitude: The height that an object is in the air.

• Average Speed: The Round Trip Distance divided by the Travel Time.

• Climb Angle: The angle formed between the rover and the FTP.

• Distance to FTP: The distance from the rover to a point above and downrange of the rover.

• Flight Time Capacity: The amount of time that is available to fly.

• Fly–To–Point (FTP): A point above the Martian surface.

• Ground Distance: The downrange distance from a rover.

• Hover Time: The amount of time spent in a stationary position above the ground.

• Round Trip Distance: The distance from the rover to the FTP and back to the rover.

• Travel Time: The time it takes to fly a certain distance.

Roving on Mars is a great way to get from point A to point B, with scientists back on Earth always looking for interesting places for the rovers to go visit and analyze. However, sometimes finding the next spot to visit can be a daunting task since scientists have to rely on satellite imagery to find compelling places to visit. But even these satellite images are not that detailed; it follows that a closer inspection of the places is always more desirable.

In the same way that a ship on the ocean has a Crow’s Nest where the crew can see further, getting to higher ground allows for greater vision of the rover on Mars. But how on Mars can one get to a higher place to see further?

Several solutions present themselves, but each solution is not noteworthy. For example, a tower can be erected from the rover, but the complexity and the mass penalty is probably too much. It would be nice if we could scout the area ahead of the rover, and survey without weighing too much. The reason is because an increase in mass equals to an increase in the amount of propellant needed just to get off the ground.

Enter the Mars Helicopter Scout (MHS). This little and ultra light weight flying machine can take off from the rover and fly out to a distance that the rover cannot see. It has solar panels on the top of the machine, and has two counter–rotating rotors that generate lift in the thin Martian air. The best part? The entire helicopter has a mass of only one kilogram!

The MHS is activated, and is sent instructions to go to a certain Fly–To–Point (FTP) away and above the rover. The helicopter lifts off and flies to the FTP, hovers, and takes images of the terrain that the rover cannot see. Afterwards, the MHS flies back to the rover where it shuts itself down and uses the solar panels to recharge its batteries. Nice!

The MHS has around 3 minutes (180 seconds) of flight time capacity, and has a maximum altitude of 120 meters AGL with a maximum Ground Distance of 600 meters downrange from the rover. These numbers will serve as our constraints for the MHS app.

Scientists on Earth feed the MHS its flight information, and off it goes. The information given to the MHS consists of three parts:

2. Desired Ground Distance away from the rover (in meters)

The Rover and FTP form a right triangle, which can be solved easily using trigonometric and triangle identities!

We can use the Pythagorean Theorem to find the Distance to the FTP, which is the hypotenuse of the right triangle. The tangent ratio is used to determine the climb angle (in degrees). The Travel Time becomes the Flight Time Capacity minus the Hover Time. We can then use that information to calculate the average speed of the MHS. 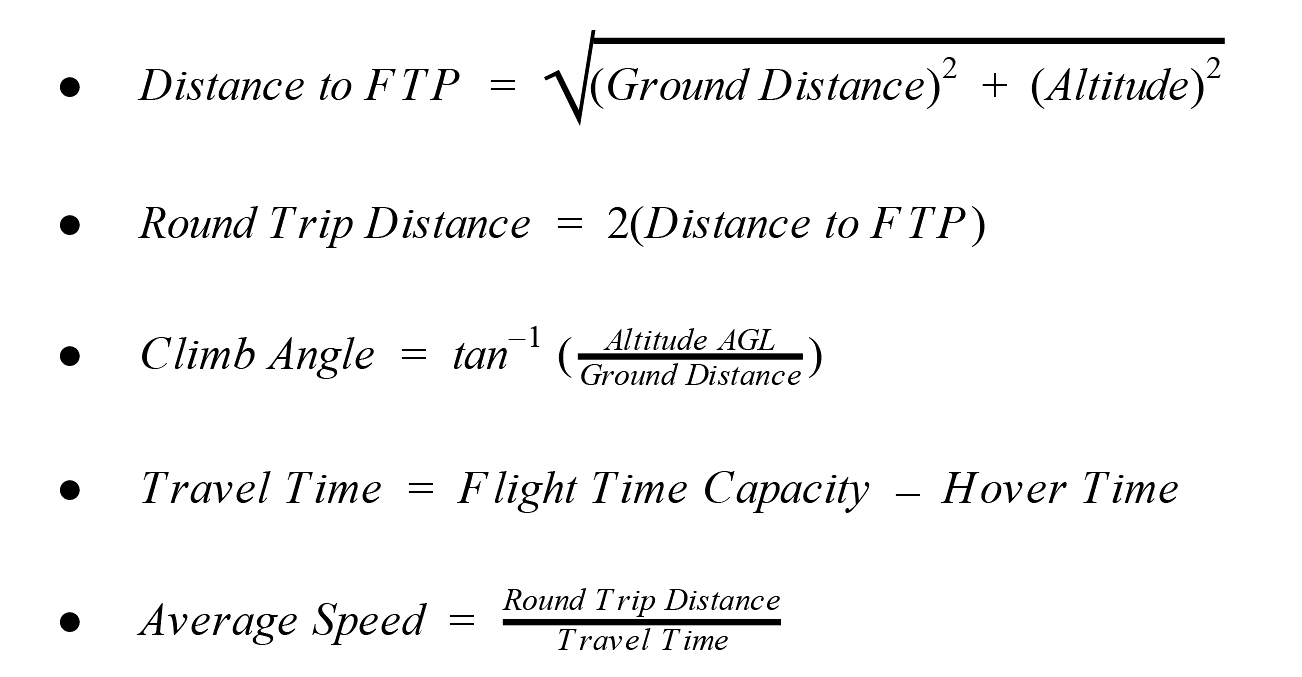 Scientists on Earth want the MHS to go to a FTP that is 400 meters downrange with an altitude of 100 meters AGL, and a hover time of 60 seconds so that the MHS can take a image of the rover. Find the Round Trip Distance, Climb Angle, and Average Speed of the MHS. 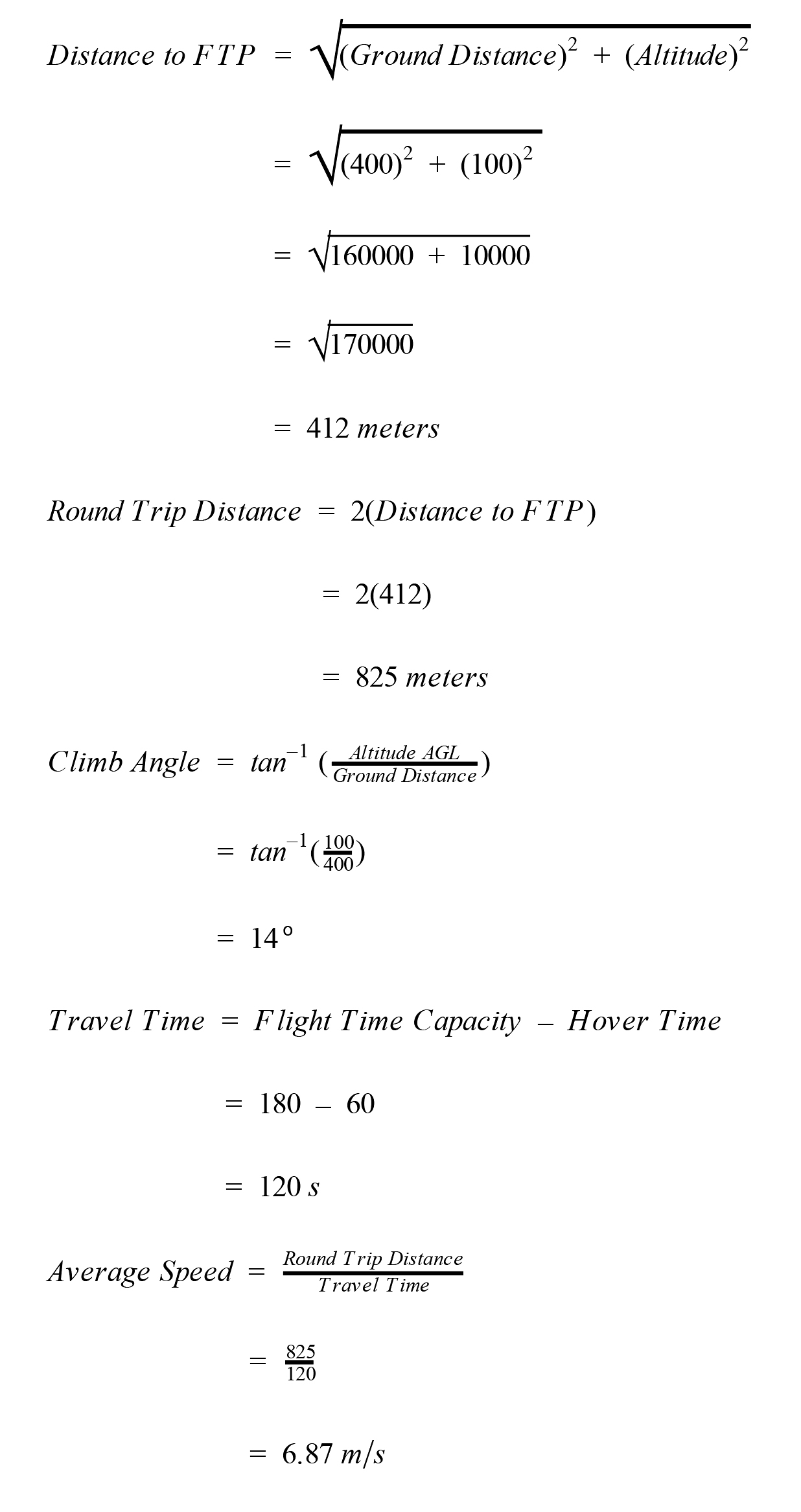 With initial conditions of 400 meters downrange, an altitude of 100 meters AGL, and a 60 second hover time, the MHS will fly a Round Trip distance of 825 meters with a Climb Angle of 14 degrees from the horizon and an Average Speed of almost seven meters per second.

The MHS science team back on Earth wants to image a rock formation ahead of the Mars rover. They wish to fly several sorties. Find the Round Trip Distance, Climb Angle, and Average Speed of the MHS given the different initial flight parameters.

Draw a picture of the MHS in its brief flight over the Martian surface in search of interesting places to record as the Earth shines brightly in the sky overhead.

• Topic: How to calculate the Distance to the FTP by solving for the hypotenuse of a right triangle given the lengths of the two other sides.

• What is your visual picture of the surface of Mars?

• Do you agree or disagree with the notion of funding explorations to other planets?

• What kind of noise do you think the MHS makes while flying in the Martian atmosphere?

• How is the MHS similar to drones used on Earth? How is it different?

• Could a version of the MHS be used on other planets?

• If you could somehow hop aboard the MHS, describe what you would see.

The Mars Helicopter Scout can fly from its perch on a rover and travel ahead to find captivating places for it to visit. The MHS will certainly make it easier for scientists to “see” further than the rover which is limited in its vision due to being so close to the ground.

Eventually, humans are going to have helicopters flying on Mars. Pretty amazing. One can only imagine what they will they think of next.

This article also appeared in the 15th issue of RocketSTEM magazine.

Next ITS: SpaceX’s bold vision for crewed exploration of the solar system