The important flight test, a first since the late 1970s with NASA’s space shuttle test article Enterprise, performed flawlessly up until the command was given to deploy the landing gear. An anomaly was encountered, causing the left landing gear to snag, and although Dream Chaser touched down on the runway 22L centerline at Edwards Air Force Base, the vehicle did sustain some minor structural damage.

That incident, however, may actually speed up Dream Chaser’s development, rather than delay it.

“We believe we had a very successful first day. The issue that we had is certainly one that I would like not to have had, but at the end of the day – on the list of things that could have gone wrong for us – it was one that is very minor in the future of the vehicle,” said Mark Sirangelo, Vice President of Sierra Nevada Corporation’s Space Systems at a teleconference held days after the test flight. “We don’t think its actually going to set us back, in some interesting way it may actually accelerate our progress. If we got all the flight data we needed to get we may actually be able to get the vehicle back to Colorado earlier to get it ready for its next flight, which may actually accelerate the program.”

The Dream Chaser was carried aloft in the skies over Edwards Air Force Base and dropped from an altitude of 12,500 feet by an Erickson Air-Crane helicopter. The release itself was accomplished perfectly, sending the vehicle into a steep 50-degree nose dive to exactly replicate the orbital re-entry flight path and prove Dream Chaser’s design is truly air-worthy.

“About 10 seconds into the dive the commands were given by the vehicle, as predicted, to begin the pullout of the dive and enter into its glide into Edwards,” said Sirangelo. “All commands given during the flight were successful, and after a period of 30-35 seconds the vehicle began finding the runway, associating itself, getting itself ready for landing, and conducting what was almost a perfectly stable flight. In the final 20 seconds of the flight the vehicle acquired the runway and lowered its rate of descent to 1.58 feet per second, exactly as predicted, and landed at 160 knots, almost precisely on the runway where we wanted to land.”

The 60-second flight itself was fairly uneventful, as the vehicle’s automated flight control system did its job of steering the test article to its intended glide slope automatically based on data collected by the vehicle’s sensors and flight computer. However, when the vehicle’s Ground Radar Altimeter initiated the sequence to open the landing gear, an anomaly occurred—the left landing gear was snagged.

“As the vehicle began its roll down the runway the automatic software noticed that the vehicle was having some difficulty and commanded the controls to compensate for that, which was something that we had predicted but we had not known was going to happen,” said Sirangelo. “Unfortunately the anomaly with the gear, which we are still investigating, caused the vehicle to eventually land down on its left side and skid off the left side of the runway. There was no damage to the runway and there were no personnel injuries of any type. The vehicle was damaged as it skidded off the runway but we believe it to be repairable and flyable again.”

“The 99% of the flight that we really wanted to get  – which was does this vehicle fly, is it able to be controlled, does the software work, can we autonomously fly the vehicle in to approach and land on a runway – all that was 100% successful,” added Sirangelo. “In fact, we probably performed better than the original test standards were meant to be. We deem this to be a significant success.”

Although the flight did not end as everyone had hoped, the incident provided a wealth of valuable data showing how strong the vehicle is.

“The entire interior of the vehicle, the pressure vessel as we call it, or crew compartment, was completely untouched by the incident,” said Sirangelo. “All systems were fully operational, there was no damage whatsoever to any of the components of the vehicle. All the flight computers continued to work, and they are still working, and there was no damage to any of the sensitive parts of the vehicle –  which tells us that the composite structure and the airframe is actually quite stable and quite strong for what we needed to accomplish.”

The landing gear itself was never intended as a permanent fixture, as it is a modified version of the gear used on the USAF F-5E Tiger fighter aircraft. Future Dream Chasers will use landing gear with electric actuators.

“As we stand right now we believe we have the data, we looked at all the data and its almost exactly as was predicted by our computing models,” added Sirangelo. “We were so successful that we actually received all of the data we think we needed for testing.”

Even though the investigation of the landing gear problem is ongoing, the data points to a mechanical failure, possibly with the door or latch—as none of the primary systems that gave the commands that control the flight failed or had any problems. Both landing gear systems—main gear and nose gear—are connected; they are mirror images of each other, and the right landing gear deployed as expected and was fully functional. Had the spacecraft design or software caused the problem, it would have affected both the right and left main landing gear.

“The vehicle has all of its components, nothing was lost – the tail, the rudders, the entire structure of the vehicle is with us and sound,” added Sirangelo. “The one landing gear in question is still attached to the vehicle, it did eventually deploy, obviously not properly but its still there, we didn’t lose it. The vehicle is surrounded by a very strong composite structure shell, which is where all the important materials (computers, crew compartment, etc) would be, and then it is surrounded by over six inches of protective layer – which in this case was a simulated thermal protection system (TPS). That actually effectively cushioned the vehicle as it went through its flight off the runway, and while that was damaged its a fairly insignificant part of it.”

“The core structure, all the flight controls, the rudders, the airlons, all those are still attached and working,” added Sirangelo. “We did lose some of the protective coating and shell of the vehicle and sustained some minor damage to some of the composites and the structure underneath. The very strong front nose skid actually continued to hold the vehicle up and do exactly what it was designed to do, and it is fully functional and working right now.” 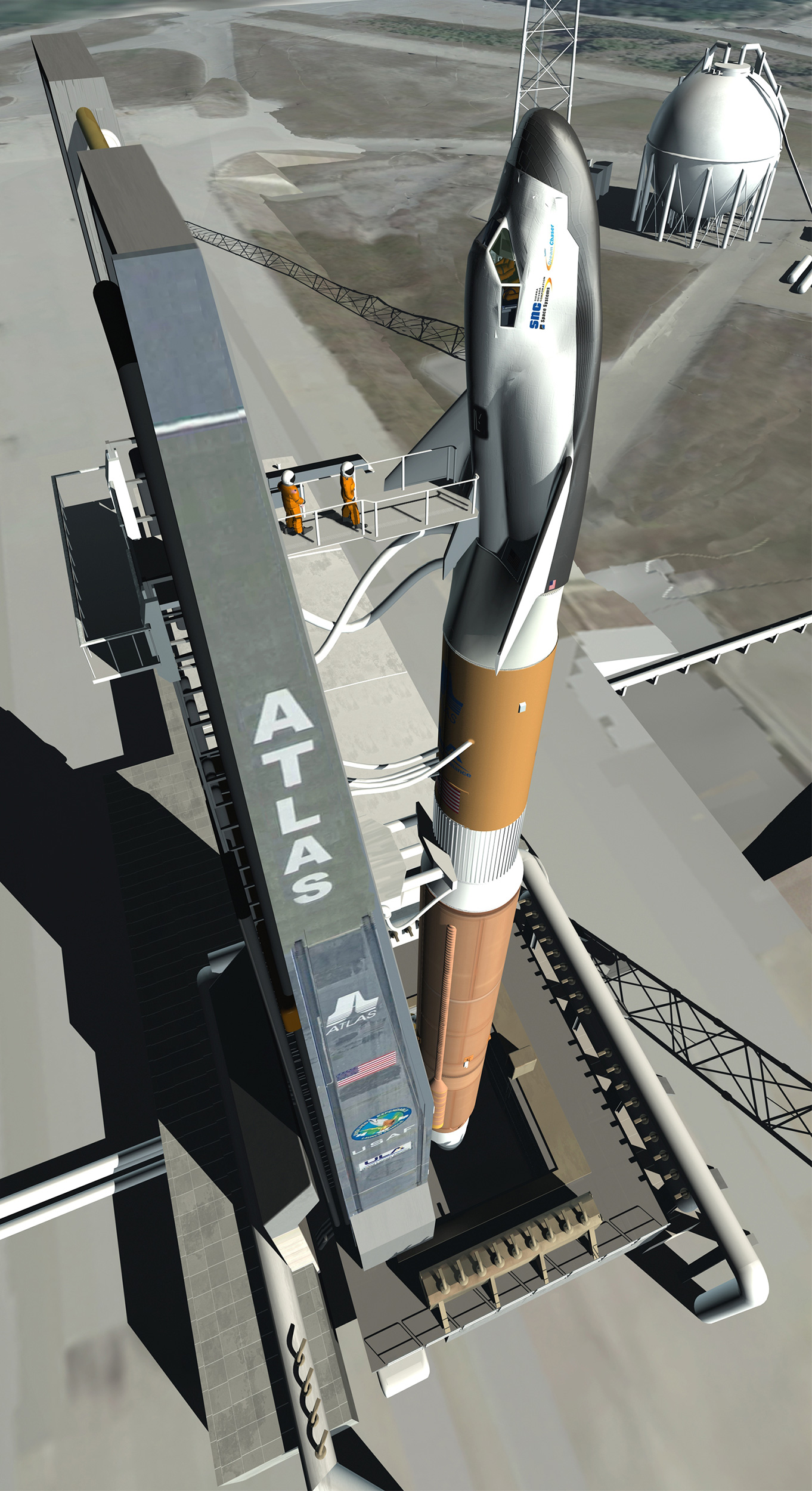 The Dream Chaser, described by many simply as a “mini space shuttle,” is a lifting body human spacecraft designed to carry as many as seven astronauts, and it is the only spacecraft under the Commercial Crew Development Round 2 (CCDev2) agreement with NASA’s Commercial Crew Program (CCP) that is winged and designed to land on any conventional runway capable of handling commercial traffic.

“NASA Langley did a lot of research on the vehicle in the 80’ and 90’s, based off a Russian heritage design called the Bor 4” said former astronaut and SNC Space Exploration Systems Vice President James Voss in 2012.  “They did wind tunnel analysis, a lot of computational fluid dynamics analysis, and they did simulations with it,” added Voss.  ”They created the control laws to be able to fly it and had a lot of astronauts come in to try it and fly it, so they did thousands of hours of work on it.

“When our company (SNC) decided to pick up a vehicle to be in using we thought it was not very smart to start with a clean sheet of paper, but lets use something NASA has already put a lot of effort and research into.  So we took the basic design and we changed it only slightly.”

The company hopes to launch the first autonomous spaceflight in 2016 atop a United Launch Alliance Atlas-V 402 rocket, with the first crewed mission espected to launch in the third quarter of 2017.

A fleet of Dream Chasers is planned to be based out of Florida’s historic launch sites at Kennedy Space Center and Cape Canaveral Air Force Station. No abort blackout zones and a 3.5-day free flight capability—with the added benefit of deorbiting at any time (since Dream Chaser can land on any conventional runway)—are a couple of the vehicle’s main selling points.

The spacecraft will also be able to stay at the International Space Station for up to seven months at a time, if needed, before having to return to Earth. An expected 1.5 G nominal reentry will provide ideal conditions for returning fragile cargo and science experiments, in addition to making the return to gravity easier on the crew. SNC also anticipates there to be immediate access to crew and cargo upon landing.

A quick turnaround and an almost entirely reusable vehicle put Dream Chaser in a class all its own.

“We had over 30 conditions that we were testing for the flight, and the vehicle either met or exceeded – in a positive way – all 30 of those conditions,” said Sirangelo. “The flight was extraordinary.”

Sierra Nevada is one of several companies currently competing to develop commercial crew transportation capabilities in cooperation with NASA, with the goal of achieving safe, reliable, and cost-effective access to and from low-Earth orbit (LEO) and the International Space Station.

Mike is an internationally published spaceflight and aerospace / aviation photojournalist who currently calls the Orlando, Florida area home. The California-native has always had a passion for spaceflight and photography, so naturally he combined the two upon moving to Florida in 2008. In the time since his work has been featured on ABC World News Tonight, National Geographic, NBC and CNN, and has been used by other organizations such as the U.S. Air Force, NASA, and GoPro. His assignments have brought him onboard NASA's space shuttles and front row to launches of spacecraft to worlds such as Mars and Jupiter, as well as on flights with the USAF and air show performers such as Rob Holland and the GEICO Skytypers.