During the past 60 years humanity has been sending mission after mission to Mars in order to learn more about our neighbor. Now it is your turn to test your knowledge about those missions that have failed to turn up any sign of the little green Martians once popular in science fiction. This latest edition of QuizMe contains 15 questions about some of the 45 and counting missions that we’ve launched toward Mars.

After you’ve finished this quiz, feel free to check out our Mars Exploration Crossword and Mars Word Search puzzles too.

Congratulations. You know your history when it comes to robotic exploration of Mars.

Keep on learning and perhaps you can be the first human to step foot on Mars in the future. 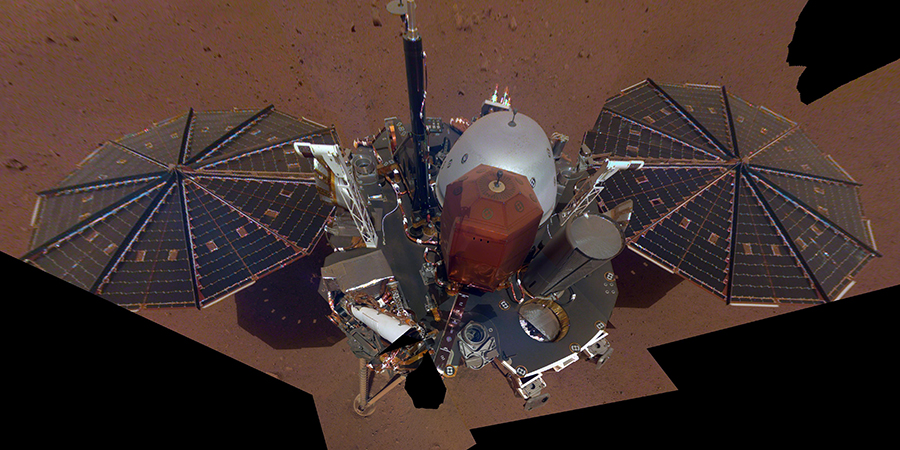 #1. The letters in the acronym “InSight” stand for?

The InSight (Interior Exploration using Seismic Investigations, Geodesy and Heat Transport, is the first Mars lander which will conduct intensive studies on Mars inner composition –
the crust, mantle, and core. This will also answer important questions about how the rocky planets in our Solar System, as well as rocky exoplanets, were formed. 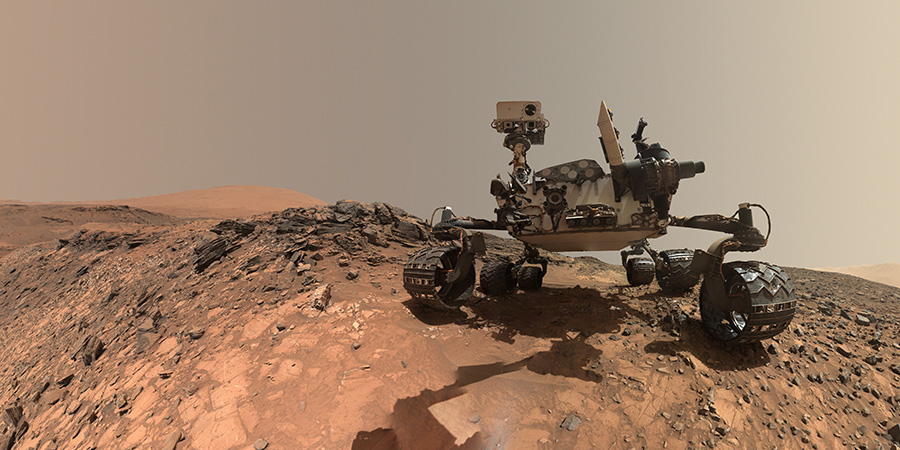 #2. What unique mechanism was used to land the Curiosity rover on Mars?

Curiosity had an exciting landing followed by people all around the world. The rover was part of the MSL mission, whose goal is to determine if microbial life was capable of being supported by either recent or past environments. 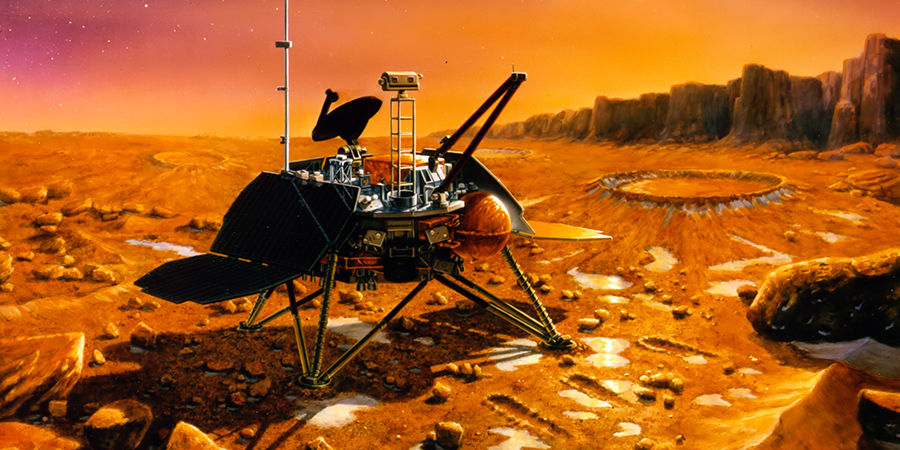 #3. The Mars Polar Lander/Deep Space 2 mission was lost upon its arrival at Mars. Had it been successful, the spacecraft would have landed near the edge of the southern polar cap to dig for ________ with a robotic arm.

The Mars Polar Lander was also carrying two small probes (Deep Space 2), that were supposed to test new technologies by impacting the surface of Mars. Both the lander, and the probes, were lost when they arrived on Dec. 3, 1999. 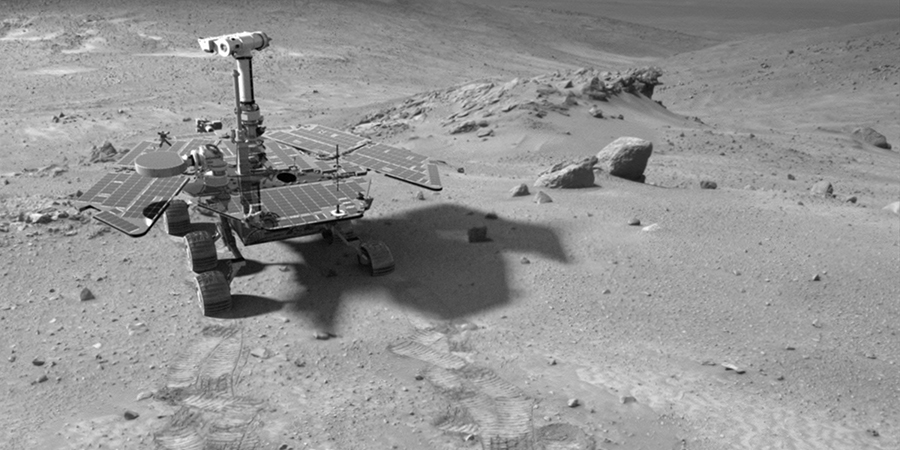 #4. In January, 2004, the Mars Exploration Rover mission landed two rovers on the surface of Mars to observe the atmosphere and conduct field geology. The names of the two rovers were?

The first scientific goal for the Mars rovers, Spirit and Opportunity, was to hunt down and study the characteristics of rocks and soil on Mars, looking for evidence of past water activity. Combined, the rovers have sent out hundreds of thousands of high-resolution photos of the Martian terrain. 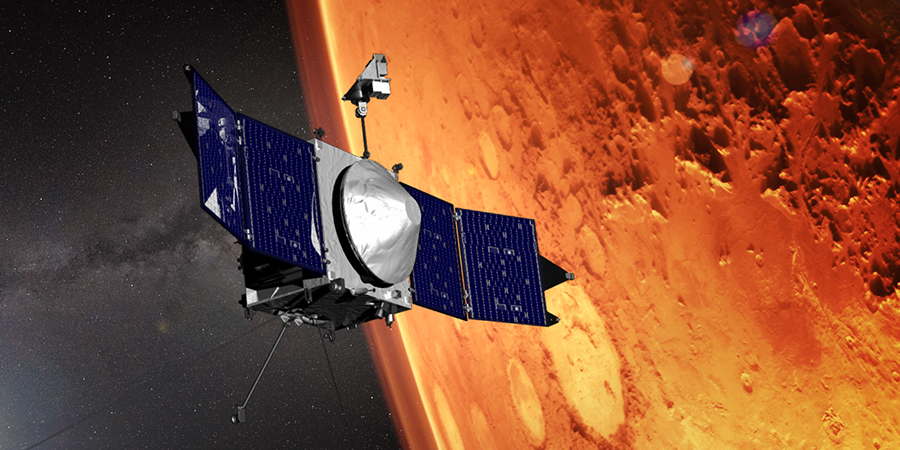 #5. The MAVEN (Mars Atmospheric and Volatile EvolutioN) spacecraft is the first to ever make direct measurements of the ________ ?

MAVEN launched Nov. 18, 2013, to explore Mars’ upper atmosphere, ionosphere, and its interactions with the Sun and the solar wind. Scientists hope to attain a more concise idea of what Mars may have looked like in the past and to learn more about Mars’ atmosphere and climate, liquid water, and planetary habitability, over time. 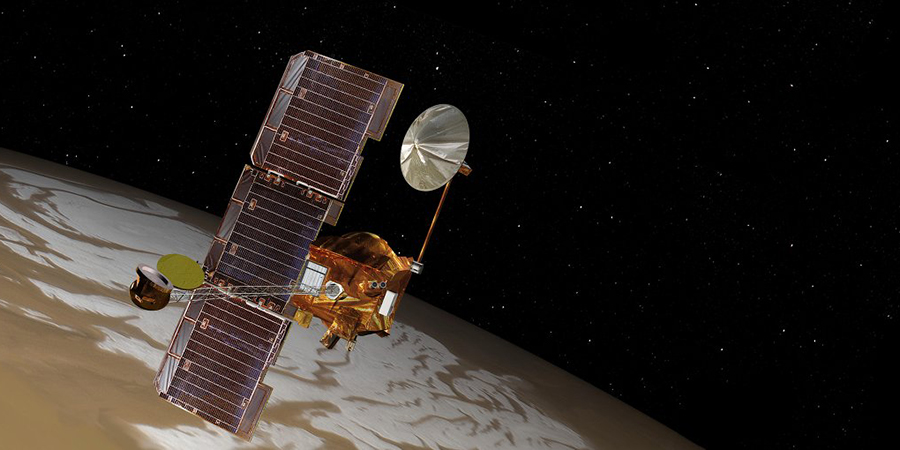 #6. The longest-lasting spacecraft at Mars is the Odyssey mission, launched in 2001. Is the orbiter’s extended operations still continuing to take place in 2020?

The Mars Odyssey mission launched out of Cape Canaveral, Florida, aboard a Delta II rocket, on Oct. 24, 2001, to study and globally map the elemental composition of the surface of Mars. It currently remains in operation. 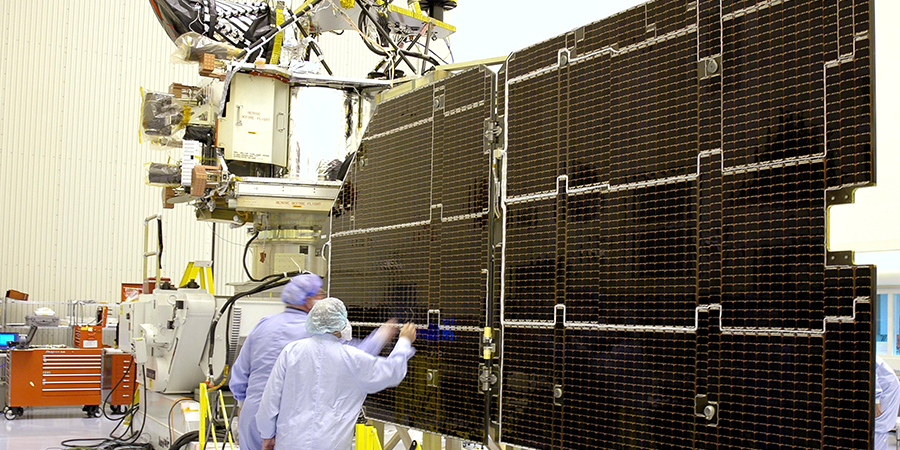 #7. The most powerful camera sent on a planetary mission, flew on which mission?

The most powerful camera sent on a planetary mission flew on the Mars Reconnaissance Orbiter. The camera has the ability to capture objects as small as a dinner table, on the surface of Mars. Armed with this visual aid, MRO has been able to guide the journeys of surface landers and rovers, and help them avoid obstacles that could jeopardize their safety. 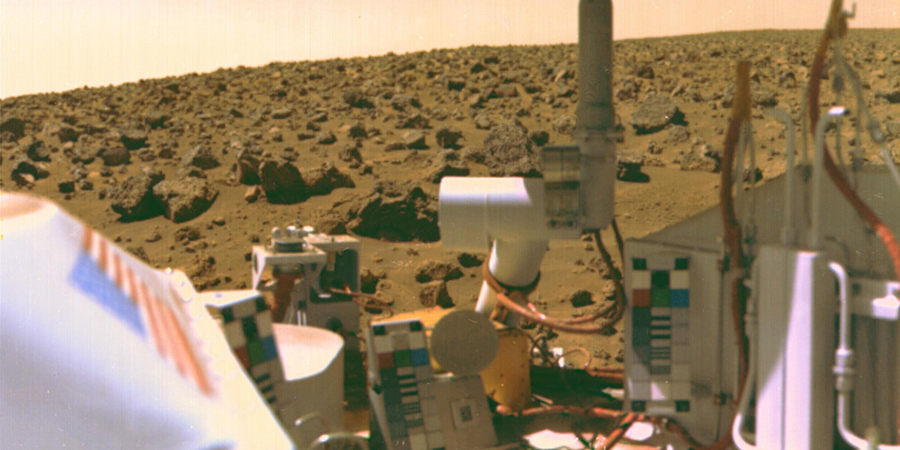 The Viking Project was the first U.S. mission to land a spacecraft safely on Mars, and then return images of its surface. The mission consisted of two identical spacecraft, each with a lander and orbiter, which flew together. After each pair would enter Mars’ orbit, they separated allowing the landers to descend to the surface. 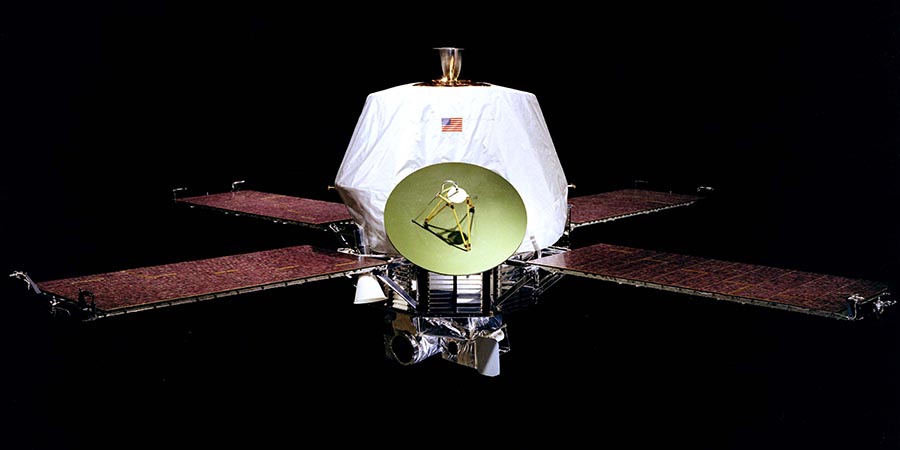 #9. NASA’s JPL designed and built how many Mariner spacecraft to explore the inner solar system, between 1962 and 1973?

NASA’s Jet Propulsion Laboratory designed and built a set of 10 small robotic explorers, named Mariner, between 1962 and 1973, to explore the inner solar system. The spacecraft were to visit the planets Venus, Mars, and Mercury, then return to Venus and Mars for additional observations. Each Mariner spacecraft completed its mission in under a year or two, except one, which lasted three years. 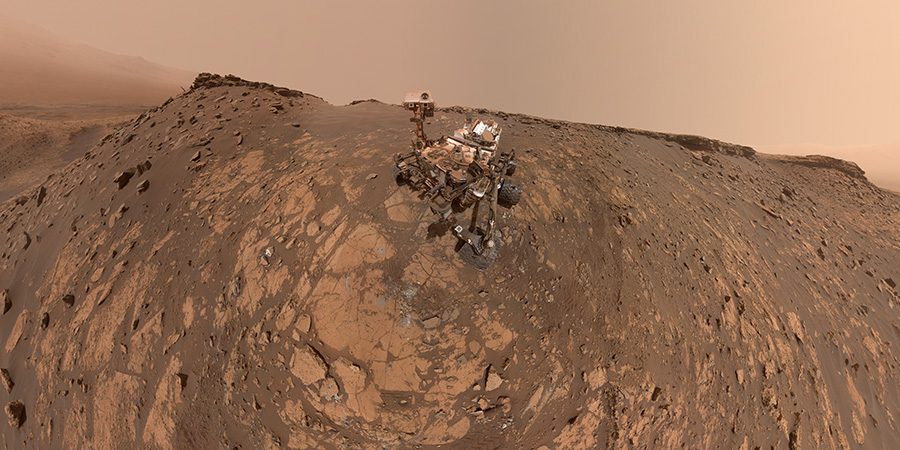 #10. This “selfie” was taken by which rover at the Hutton Drill Site on Mars?

This isn’t your average selfie! Curiosity took this photo using the Mars Hand Lens Imager (MAHLI) camera, on the end of its robotic arm. A total of 86 individual images were taken and stitched together into the panorama you see here. 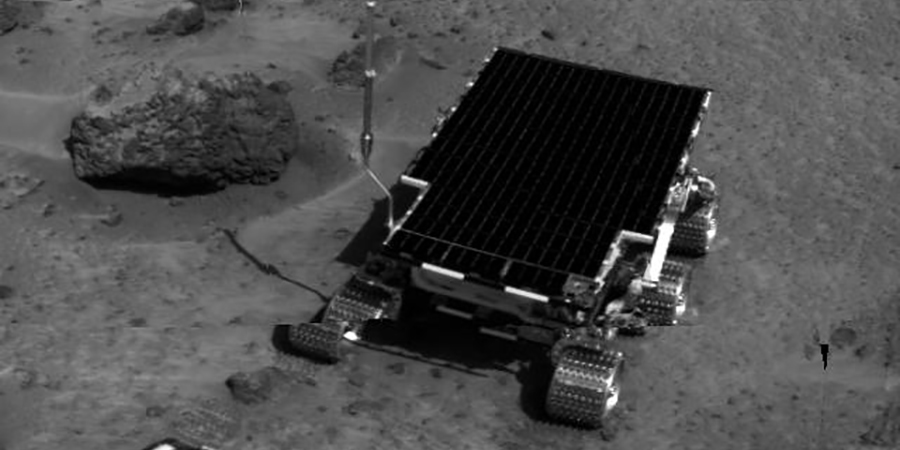 The Mars Pathfinder mission consisted of a lander and a rover. The lander was formally named the Carl Sagan Memorial Station after its successful touchdown on the surface of Mars. The rover, Sojourner, was named after American civil rights crusader, Sojourner Truth. Both pieces of equipment outlived their design lives. Over its lifetime, the mission returned 2.3 billion bits of information, which included 16,500 images from the lander and 550 images from the rover. 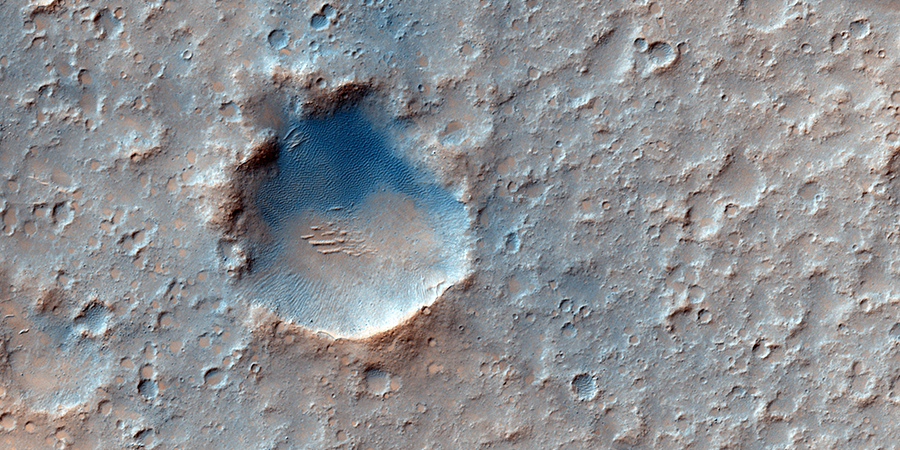 #12. The separate Martian landing locations for the Spirit and Opportunity rovers were Gusev Crater and Meridiani Planum. These sites were targeted since they showed evidence of being affected by what?

Spirit and Opportunity were targeted to land on sites on opposite sides of Mars because of the possibility of liquid water existing at those areas, in Mars’ past. Meridiani Planum, Opportunity’s landing site, was chosen because there was possibly a former lake in a giant impact crater there. Spirit was sent to Gusev Crater, where the existence of mineral deposits made the case for the possibility of water in the past. 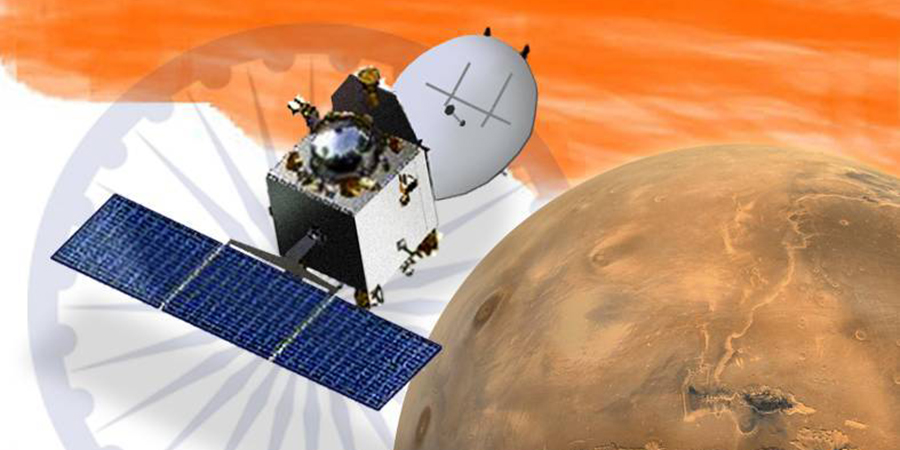 #13. India is the fourth nation to successfully send a spacecraft to Mars. What was the name of the mission?

On Nov. 5, 2013, India launched its first mission to the Red Planet to test key technologies for interplanetary exploration and to study the Martian surface and atmosphere from orbit. The Mars Orbiter Mission (MOM) is also sometimes referred to as Mangalyaan, a Sanskrit term for Mars craft. 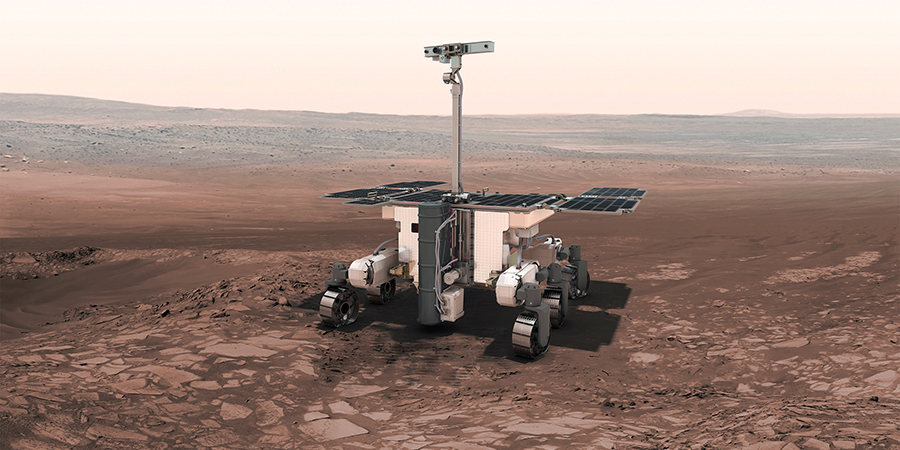 #14. What is the name of the joint European/Russian mission slated for 2022?

ExoMars will send a European rover, Rosalind Franklin, and a Russian surface platform, Kazachok, to the surface of Mars. The primary objective is to land the rover at a site with high potential for finding well-preserved organic material, particularly from the very early history of the planet. The drill is designed to extract samples from various depths, down to a maximum of two meters. 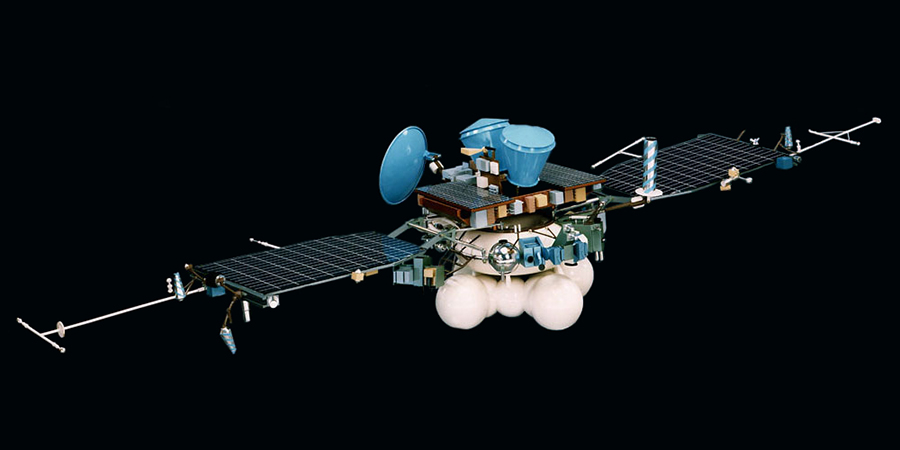 #15. The ________ mission, was an ambitious Russian mission launched in the 1990s, to investigate the evolution of the Martian atmosphere, its surface, and its interior.

This quiz appeared in the 15th issue of RocketSTEM magazine.