A pair of veteran NASA astronauts flying aboard a commercial SpaceX Crew Dragon spacecraft safely docked at the International Space Station ISS) this Sunday morning just 19 hours after the first human launch from US soil for the first time in nine years on a history-making and flawless blastoff from the Florida Space Coast.

NASA astronauts Robert Behnken and Douglas Hurley arrived in the vicinity of the International Space Station on Sunday morning, May 31, aboard the first-ever commercially built and operated American spacecraft to carry humans to orbit – thus opening a fabulous new era in human spaceflight with virtually unlimited potential. After launch, they announced that they had named the capsule Endeavour after the Space Shuttle orbiter that launched each into space on their first mission years before.

Hurley and Behnken docked to the forward-facing end of the space station’s Harmony module at 10:16 a.m. EDT (1416 GMT) Sunday as the orbiting laboratory complex flew 262 miles (421 km) above the border between northern China and Mongolia – just under 19 hours after liftoff.

Following the soft dock between Crew Dragon and the space station, the teams worked to close the 12 hooks and latches binding the two ships together for a hard mate and airtight seal.

After completing leak checks and other critical chores over the next few hours the hatches on both sides were opened one by one at 1:02 p.m. EDT.

The newly arrived dynamic duo from the SpaceX Demo-2 test flight mission then gently floated through the opening and joined the 3 crewmates of Expedition already aboard.

Behnken and Hurley are the first astronauts to fly SpaceX’s Crew Dragon to the station. They were welcomed as crew members of Expedition 63 by fellow NASA astronaut Chris Cassidy and two Russian cosmonauts Anatoly Ivanishin and Ivan Vagner.

The newly-arrived astronaut duo posed for pictures and took a congratulatory phone call from NASA Administrator Jim Bridenstine and other dignitaries gathered in Mission Control at the Johnson Space Center in Houston, Texas.

“The whole world saw this mission, and we are so, so proud of everything you’ve done for our country and, in fact, to inspire the world,” NASA Administrator Jim Bridenstine told the crew from the floor of Mission Control in Houston.

“This represents a transition in how we do spaceflight from the United States of America. NASA is not going to purchase, own and operate rockets and capsules the way we used to; we’re going to partner with commercial industry.

The beautiful and flawless blastoff of the Crew Dragon spacecraft carrying NASA veteran astronauts Robert Behnken and Douglas Hurley lifted off on the historic test flight at 3:22 p.m. EDT Saturday, May 30, on the company’s Falcon 9 rocket from Launch Complex 39A at NASA’s Kennedy Space Center in Florida bound for the International Space Station (ISS) – to the cheers of tens of thousands of spectators gathered from around America and three days after dismal weather forced a scrub of the first attempt on Wednesday.

The NASA SpaceX Demo-2 test flight mission marks the resumption and restoration of the United State’s human spaceflight capability from American soil for the first time since the retirement of NASA’s Space Shuttles in 2011. In another historic first the Demo-2 mission marks the first time in history that NASA astronauts have launched from American soil in a commercially built and operated American crew spacecraft on its way to the International Space Station. 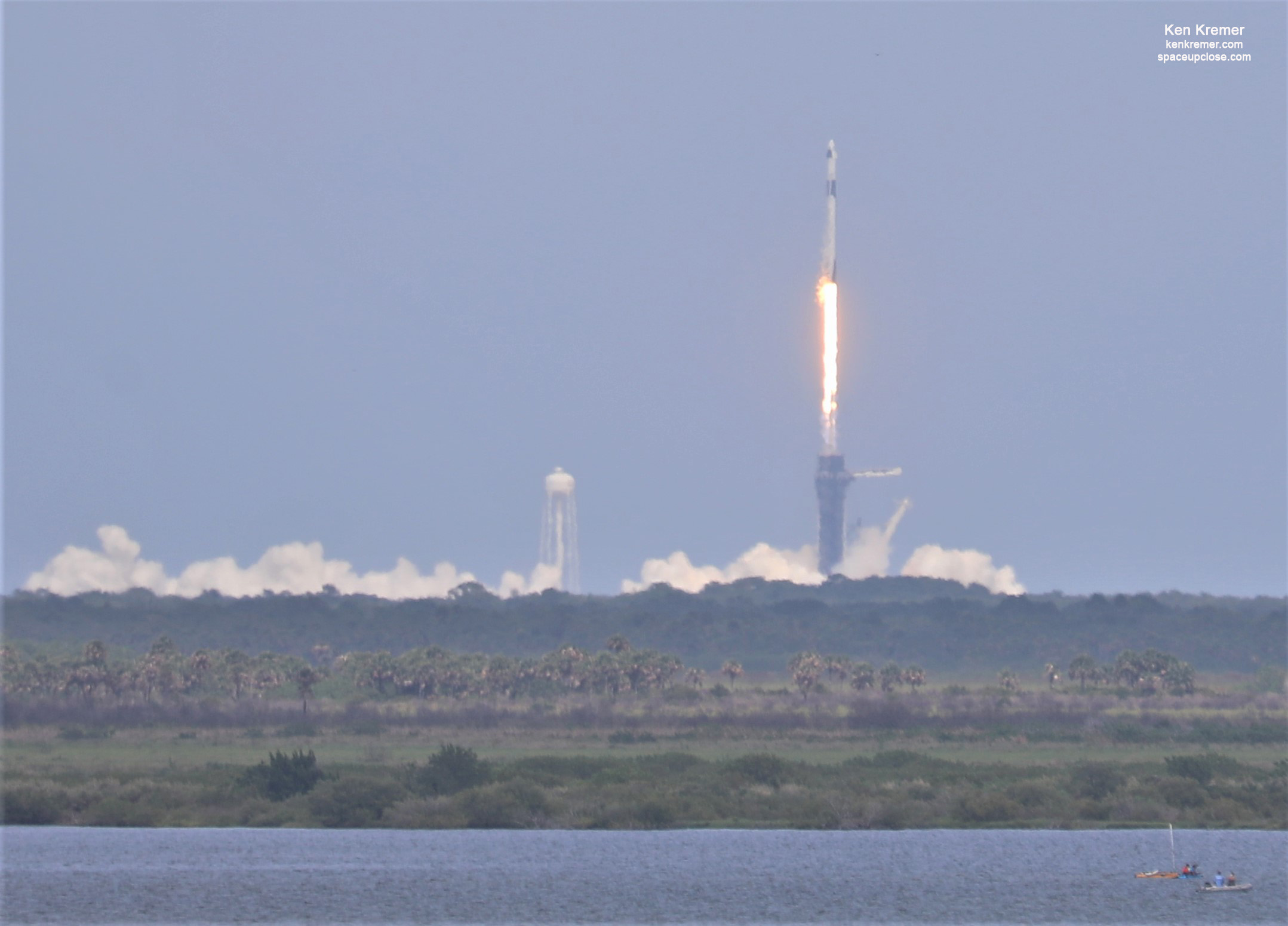 “Dragon was huffing and puffing all the way into orbit, and we were definitely driving or riding a Dragon all the way up,” Behnken said during the welcoming ceremony inside the space station’s Harmony module.

“While we’re on-board the space station with a new spacecraft, we do hope to put her through her paces. So the good ship Endeavour is going to get a lot of checkout over the next week or two here, and hopefully, we’ll be able to declare her operational.”

“It’s great to get the United States back in the crewed launch business and we’re just really glad to be onboard this magnificent complex. We’re just happy to be here, and Chris is going to put us to work,” Hurley added.

“We had a couple of opportunities to take it (Dragon) out for a spin so to speak, once after we got into orbit last night and today about 20 minutes before we docked. My compliments to the folks back at Hawthorne and SpaceX on how it flew. We couldn’t be happier about the performance of the vehicle.”

Dr. Ken Kremer is a speaker, freelance science journalist, scientist and photographer (Princeton, NJ) whose articles and space exploration images have appeared on TV, magazines, books and on websites. Ken has presented at numerous educational institutions, civic & religious organizations, museums, conventions and astronomy clubs. Ken lectures on both Human and Robotic spaceflight. Ken has a PhD in Organic Chemistry and over 25 years of Research & Development and Manufacturing experience in the US, Europe & South America. Ken has written over 600 articles. He has 3 dozen scientific publications including 17 US Patents. He has witnessed about 3 dozen Space Shuttle & rocket launches. Ken has been a science & space consultant to NASA, JPL and various news organizations across the US, Europe and Asia.