Ice and Stone 2020 is a weekly series of educational material focusing on some of the small bodies of the solar system – comets and asteroids. The Earthrise Institute, a non-profit founded by Comet Hale-Bopp co-discoverer Alan Hale, is partnering with the La Cumbres Observatory and RocketSTEM to release the material for FREE online so that all teachers, students and parents worldwide have access to it. At the beginning of each week Ice and Stone 2020 will unveil three new presentations: This Week in History, Comet of the Week, and a Special Topic.

In 1766 a German astronomer, Johann Titius, reported a curious mathematical relationship between the orbits of the planets in the solar system, which was popularized six years later by another German astronomer, Johann Bode; it is usually referred to as “Bode’s Law” although sometimes it is called the “Titius-Bode Law.” In essence, if one starts with zero, then adds three and doubles that and every subsequent number, then adds four to each number in the sequence and divides the results by ten, the “law” reproduces rather well the semimajor axes of the solar system’s planets that were known at the time.

The obvious “gap” at 2.8 AU is quite noticeable, and many astronomers of that era were convinced that an as-yet undiscovered planet existed at that location. In 1800 several of these individuals, who were later informally dubbed the “celestial police,” met in Lilienthal, Germany, to map out strategies for searching for this object. Before this effort could get underway, however, it was pre-empted by the Director of the Royal Observatory in Palermo, Sicily, Giuseppe Piazzi, who, on January 1, 1801 – the first day of the 19th Century – discovered a star-like object that moved from night to night. Piazzi followed his object for the next six weeks before he was stopped by illness, and shortly thereafter it was lost in sunlight as it approached conjunction with the sun. Through heroic orbital calculations performed by the German mathematician Karl F. Gauss the object was recovered in the morning sky on the last day of 1801.

Piazzi’s object was eventually given the name Ceres, the Roman goddess of agriculture – and, incidentally, the patron goddess of Sicily. With an orbital period of 4.6 years and an average distance of 2.77 AU Ceres fits in nicely with Bode’s “Law,” and at least some astronomers felt that the “missing” planet had been found. Its relative faintness – never brighter than 7th magnitude – in turn suggested that it is quite small, however, and some astronomers of the era were unconvinced that it was all there was to the story. On March 28, 1802, one of the “policemen,” the German astronomer Heinrich Olbers, discovered a second object – since named Pallas – that appeared to confirm this. Another “policeman,” Karl Harding, discovered a third object – since named Juno – on September 1, 1804, and Olbers discovered a fourth – since named Vesta – on March 29, 1807.

There were no additional discoveries for quite some time thereafter, and the general consensus as the time was that, collectively, these four objects represented the “missing” planet. But then, in 1845, a German amateur astronomer, Karl Hencke, after 15 years of unsuccessful searching discovered a fifth object, now named Astraea, and then a sixth object – named Hebe – two years later. Other astronomers of the time began to get in on the action, and pretty soon similar objects were being discovered all the time; by the end of the 19th Century several hundred had been found. By this time the practice of astro-photography was coming into its own, and so many of these objects were appearing on the photographic plates that one astronomer of the era dubbed them the “vermin of the skies.” With the advent of the comprehensive CCD-based survey programs near the end of the 20th Century thousands were being detected every month, and nowadays over half a million of them have had valid orbits computed. 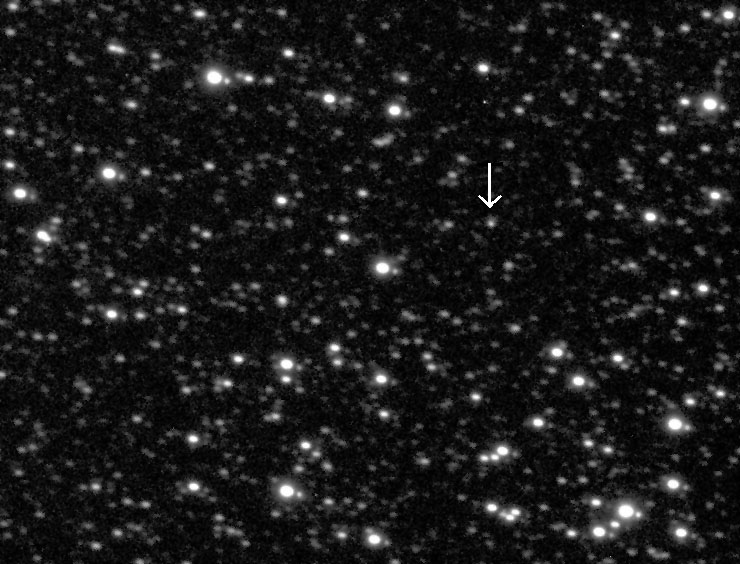 Due to their stellar appearance these objects are normally referred to as “asteroids” (from Greek words meaning “star-like”), although a slightly more formal term is “minor planets.” The overwhelming majority of known asteroids reside in what is normally called the “main asteroid belt” between the orbits of Mars and Jupiter. The large majority of known asteroids are quite small, usually only a few km in diameter (and there surely must be many more that are smaller than this but just too faint to detect); Ceres, meanwhile, remains the largest main-belt asteroid with a diameter of 950 km. Vesta, although somewhat smaller than Ceres with an average diameter of 525 km, has a more reflective surface than Ceres and is the brightest of the main-belt asteroids, occasionally becoming bright enough to be viewed with the unaided eye (5th to 6th magnitude).

Physical studies of the asteroids indicate that they vary widely in composition. Some contain substantial amounts of metals and are quite dense; others are made up more of silicates and are accordingly less dense, and others are little more than “rubble piles” of rather low density. Quite a few of them contain significant amounts of organic materials, and some of them also contain substantial amounts of water (although this water would not be free-standing but rather is contained within the form of hydrated clays and other similar materials). They are not massive enough to have any kind of atmosphere, with the exception of Ceres which has on occasion exhibited indications of trace amounts of an atmosphere, most likely due to sun-driven sublimation of water ice on its surface as well as the interaction of coronal mass ejections with that ice.

An early idea, apparently originally suggested by Olbers, is that the asteroids are remnants of a planet that once existed between Mars and Jupiter but that exploded or otherwise disintegrated (perhaps as a result of an impact by another large object). This idea is no longer seriously considered, and the overwhelming consensus today is that the asteroids are “leftover” planetesimals from the formation of the solar system, with the gravitational perturbations from nearby Jupiter preventing a planet from forming in this region. (In this case, the asteroids would be a planet that “never was.”) The overall mass of the asteroids within the main belt is only 0.05% the mass of Earth, but this was likely significantly larger in the distance past; erosion via collisions, ejection from the solar system, and impacts into the other planets would have substantially decreased the population of asteroids over the billions of years since the planets formed.

Contrary to the images portrayed within popular media, the asteroid belt is not a region of space that is hazardous for spacecraft to navigate. Indeed, the volume of space is so large that the average distances between asteroids are on the order of hundreds of thousands of km. (To be sure, collisions between asteroids do occur from time to time, but – at least for somewhat large asteroids – over timescales of millions of years.) For a spacecraft to pass by an asteroid requires detailed planning and precise calculations, but nowadays most spacecraft missions to the outer solar system will involve a flyby of one or more main-belt asteroids if any can be found that are in the general vicinity of the expected trajectory.

The first asteroid to be visited by a spacecraft was (951) Gaspra, which was encountered on October 29, 1991, by NASA’s Galileo mission while it was en route to Jupiter. As of this writing a total of nine main-belt asteroids have been visited by spacecraft. Two of these have been orbited, both of these by NASA’s Dawn mission which was launched in September 2007: Vesta from July 2011 until September 2012, and Ceres, ever since March 2015 (although the mission itself was forma-2017 and Dawn ran out of its hydrazine fuel in November 2018). These various encounters will be discussed in more detail in a future week’s “Special Topics” presentation. 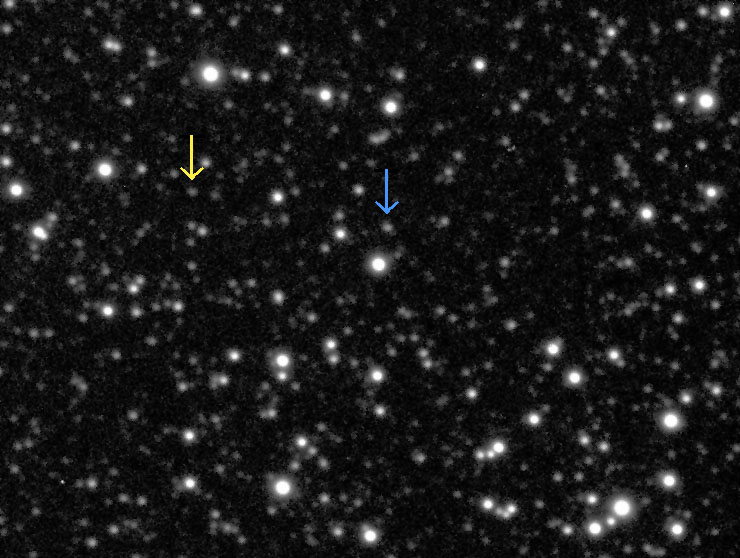 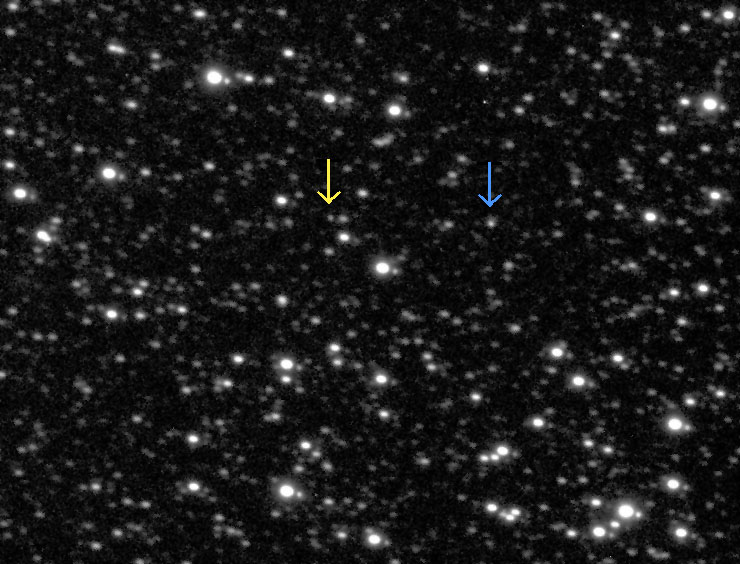 Previous Canada working with U.S. to inspire a future generation of astronauts