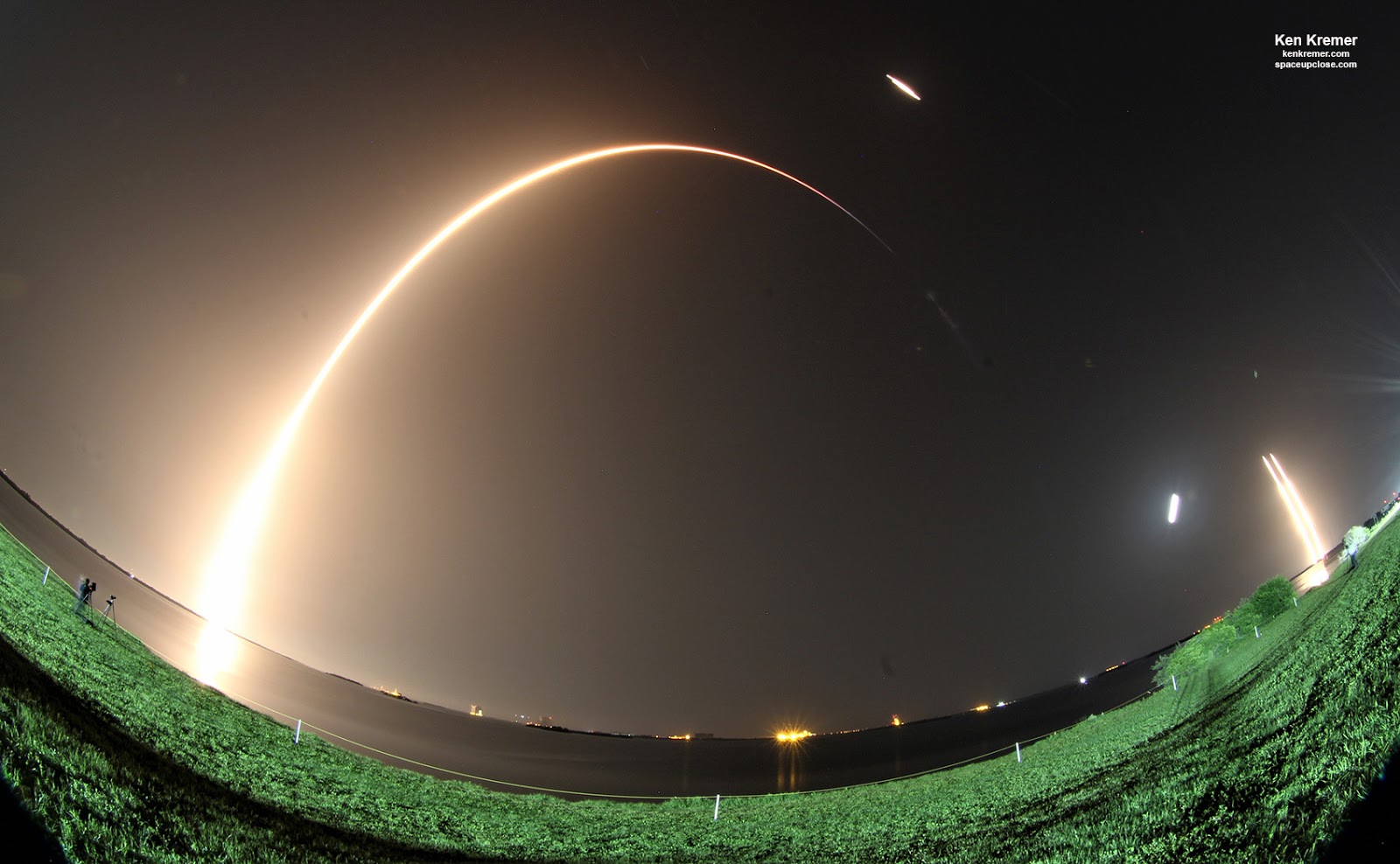 Twenty-four science satellites streaked to orbit during an absolutely spectacular middle-of-the-night liftoff Tuesday. It was the first night launch of the triple-stick SpaceX Falcon Heavy program. As an added bonus it also featured the first ever fairing catch by the Ms. Tree boat out at sea, as well as twin landings of the side boosters back at Cape Canaveral Air Force Station in Florida.

STP-2 was procured by the Department of Defense (DoD) and managed by the U.S Air Force Space and Missile Systems Center (SMC) with NASA as a partner.

“This launch was a true partnership across government and industry, and it marked an incredible first for the U.S. Air Force Space and Missile Systems Center,” said Jim Reuter, associate administrator for NASA’s Space Technology Mission Directorate.

“The NASA missions aboard the Falcon Heavy also benefited from strong collaborations with industry, academia and other government organizations.”

And what a wallop it was.

Shortly after ignition of all 27 Merlin 1D first stage engines a blaze of fire spewed from the engines and literally that turned night into day from one moment to the next.

And the crackling roar of the engines shuttered across the Cape delighting tens of thousands of spectators who gathered from across the globe for the first ever night launch of the SpaceX Falcon Heavy that evolved into a middle of the night launch due to the 180-minute postponement that pushed the launch from 11:30 p.m. Monday evening to 2:30 a.m. EDT Tuesday morning.

But the excitement didn’t end there with the thundering off the pad. No.

Approx 2 minutes and 30 seconds after liftoff the twin side boosters separated as the center core continued firing and illuminated the exhaust plume.

As a result the night sky erupted with flashes of colored light for a few brief and stunning seconds.

It looked like the birth of a supernova. But it wasn’t – just the engine flames lighting up the rocket vapor trail and as the side booster began their boost back burns.

Meanwhile the core stage and second stage separated at 3 minutes and 31 seconds after launch.

Then the side boosters carried out their entry and landing burns.

As the side booster engine firings slowed their plummet to Earth they passed through the sound barrier just a few hundred feet above ground and sent a multitude of bone rattlingly loud sonic booms screaming across the Space Coast region and beyond.

Houses and windows rattled as people were awoken and babies started crying, according to reports from local residents.

Only the center core did not succeed with a touchdown at sea on the OCISLY droneship. It crashed into the ocean just beside the droneship

This Falcon Heavy mission – only the third overall – was the first one to utilize recycled rockets. The side boosters were recycled from the last Falcon Heavy launch in April 2019 on the Arabsat 6A mission.

Both side boosters safely touched down and landed upright and intact back at the Cape at Landing Zones 1 and 2 or LZ-1 and LZ-2: 8 minutes and 41 seconds after liftoff.

The mission was ordered by the U.S. Air Force and is the “most difficult launch ever” for SpaceX says SpaceX CEO and billionaire founder Elon Musk.

STP-2 is the first ever Falcon Heavy mission for the DOD and includes science, research and military research and technology payloads for the US Air Force as well as four satellites for NASA, six satellites for NOAA, also a number for Universities, Industry and one for the Planetary Society and human ashes too.

The triple-stick Falcon Heavy successfully delivered 24 science, research, technology development and military research satellites to space into three separate orbits and inclinations as the second stage was fired for a record four separate times in another test scoping out the range of its capabilities.

Furthermore the mission duration for the 4 second stage engine firings to enable the two dozen satellite deployments was a record-breaking 6 hours.

All 24 satellites were successfully deployed and are in communication, the Air Force Space & Missile Systems Center said.

“Deployment of 24 satellites aboard the Falcon Heavy was successful! Thank you & congratulations to our partners on a successful mission!” tweeted the Air Force Space & Missile Systems about 12 hours after liftoff.

“All satellites are on orbit and have made contact!”

Included on the manifest are four NASA payloads investigating technologies that will help improve future spacecraft design and performance in space.

The NASA payloads aboard the Space Test Program-2 flight include:

NOAA along with NASA, the USAF and others are sponsoring the Constellation Observing System for Meteorology Ionosphere & Climate-2, or COSMIC-2 system – a constellation of six satellites. They will orbit 322 miles above Earth with a mass of 250 kg.

The Falcon Heavy first stage is comprised of three Falcon 9 cores. The center core is new and plumbed differently from the twin pair of side cores – which were recycled from the Arabsat 6A launch in mid- April.

Next 'Rocket to the Moon' with the multitalented Don Brown

Dr. Ken Kremer is a speaker, freelance science journalist, scientist and photographer (Princeton, NJ) whose articles and space exploration images have appeared on TV, magazines, books and on websites. Ken has presented at numerous educational institutions, civic & religious organizations, museums, conventions and astronomy clubs. Ken lectures on both Human and Robotic spaceflight. Ken has a PhD in Organic Chemistry and over 25 years of Research & Development and Manufacturing experience in the US, Europe & South America. Ken has written over 600 articles. He has 3 dozen scientific publications including 17 US Patents. He has witnessed about 3 dozen Space Shuttle & rocket launches. Ken has been a science & space consultant to NASA, JPL and various news organizations across the US, Europe and Asia.