The largest and most powerful American rocket currently flying, United Launch Alliance’s Delta IV Heavy, lifted off from Launch Complex 37 at the Cape Canaveral Air Force Station at 1:51 p.m. on June 11, 2016 on the NROL-37 mission after a 48-hour delay due to weather. The payload for this launch was a classified satellite for the National Reconnaissance Office. The satellite was deployed directly into a geosynchronous orbit of 22,300 miles, but the exact location above the earth which the satellite will be at is also classified.

In spite of being on the pad for over 3 months, the Delta IV Heavy performed flawlessly, lifting off when the three Common Booster Cores (CBCs) ignited. The vehicle slowly rose off the pad gaining speed with every foot of altitude it achieved as the three engines left a trail of flame and smoke behind them.  Without the aid of Solid Rocket Boosters (SRBs), the Delta IV Heavy rises slower from the pad than its smaller Delta IV M version sporting SRBs or the Atlas V with SRBs.

The Delta IV Heavy is made up of three identical Common Core Boosters strapped together. Each CBS is powered by a single Aerojet  Rocketdyne RS-68A engine delivering 702,000 pounds of lift-off thrust  for a combined lift-off thrust of just over 2.1 million pounds.  This allows the Delta IV heavy to deliver up to 30,440 pounds of payload to GTO (Geosynchronous Transfer Orbit) or up to 62,540 pounds of payload to LEO (Low Earth Orbit). Burning liquid-hydrogen and liquid-oxygen, the RS-68A booster engine is the most powerful booster engine in the world.  Upon ignition, all three boosters ignite at the same time and push the rocket off the pad, about 50 seconds into flight the core CBC throttles down to 57% in what is known as Partial Thrust Mode. The vehicle hits Max-Q, or Maximum Dynamic Pressure where the atmosphere exerts the most aerodynamic stress on it, at 1 minute and 22 seconds into the flight. The twin strap-on boosters burn at full thrust until shortly before they complete their burns 242 seconds into the flight. They are the jettisoned a few seconds later.  The core CBC has plenty of fuel left since it was throttled to 57% for a good portion of the flight when all three CBCs were firing, and will continue skyward for an additional 90-plus seconds, returning to full-throttle for more than 65 of those seconds. At 328 seconds after liftoff, the core CBC shuts down and the second stage separates a few seconds later. The Delta Cryogenic Second Stage is powered by a single Pratt & Whitney RL-10B-2 engine and, depending on the mission will fire one or more times to place the payload in its desired orbit.

At 232 feet in height and spanning over 50 feet across at the base, the vehicle is quite a sight both while standing on the pad and while in flight. The vehicle’s weight at liftoff is approximately 1.6 million pounds and burns fuel so rapidly that its weight decreases by 4,744 pounds per second while all three boosters are firing.

This was the ninth launch of the behemoth launcher with the first occurring in 2004, a test flight of the newly designed rocket with a boilerplate payload.  The first operational flight came in 2007. Out of the eight flights for customers so far, six of them have been for the National Reconnaissance Office and one for the Air Force. The most recent flight before today was a launch for NASA on December 5, 2014 when the vehicle launched the first Orion space capsule on its historic first test flight. Orion soared to over 3,600 miles above the Earth before returning in a fiery reentry at more than 20,000 MPH and then parachuting to a safe landing in the Pacific Ocean.

With at least four more launches of the Delta IV Heavy to come through 2020, make sure to put this vehicle on your must see launch list.

More photos by Lloyd Campbell of the Delta IV Heavy rocket from the secretive NROL-37 mission: 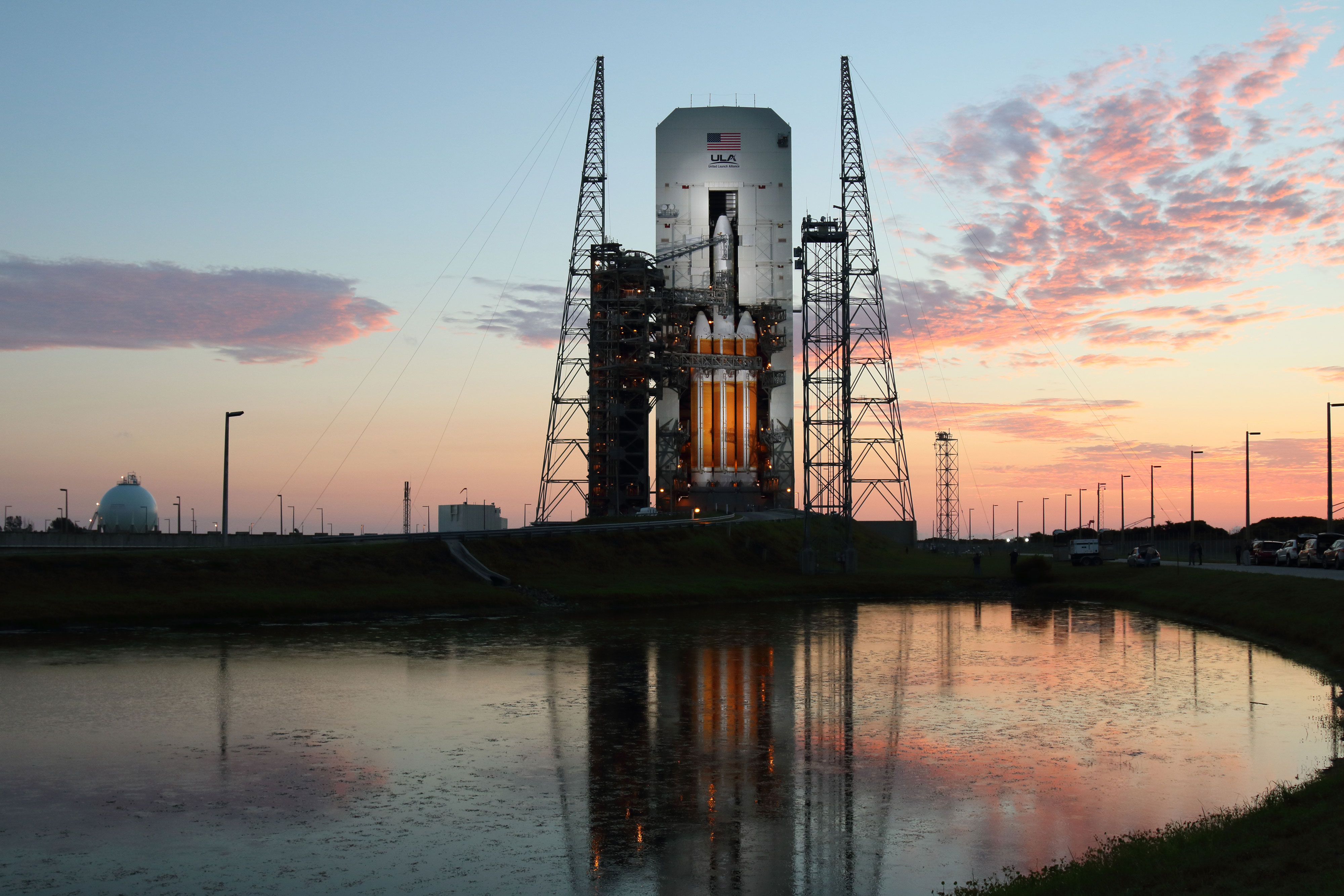 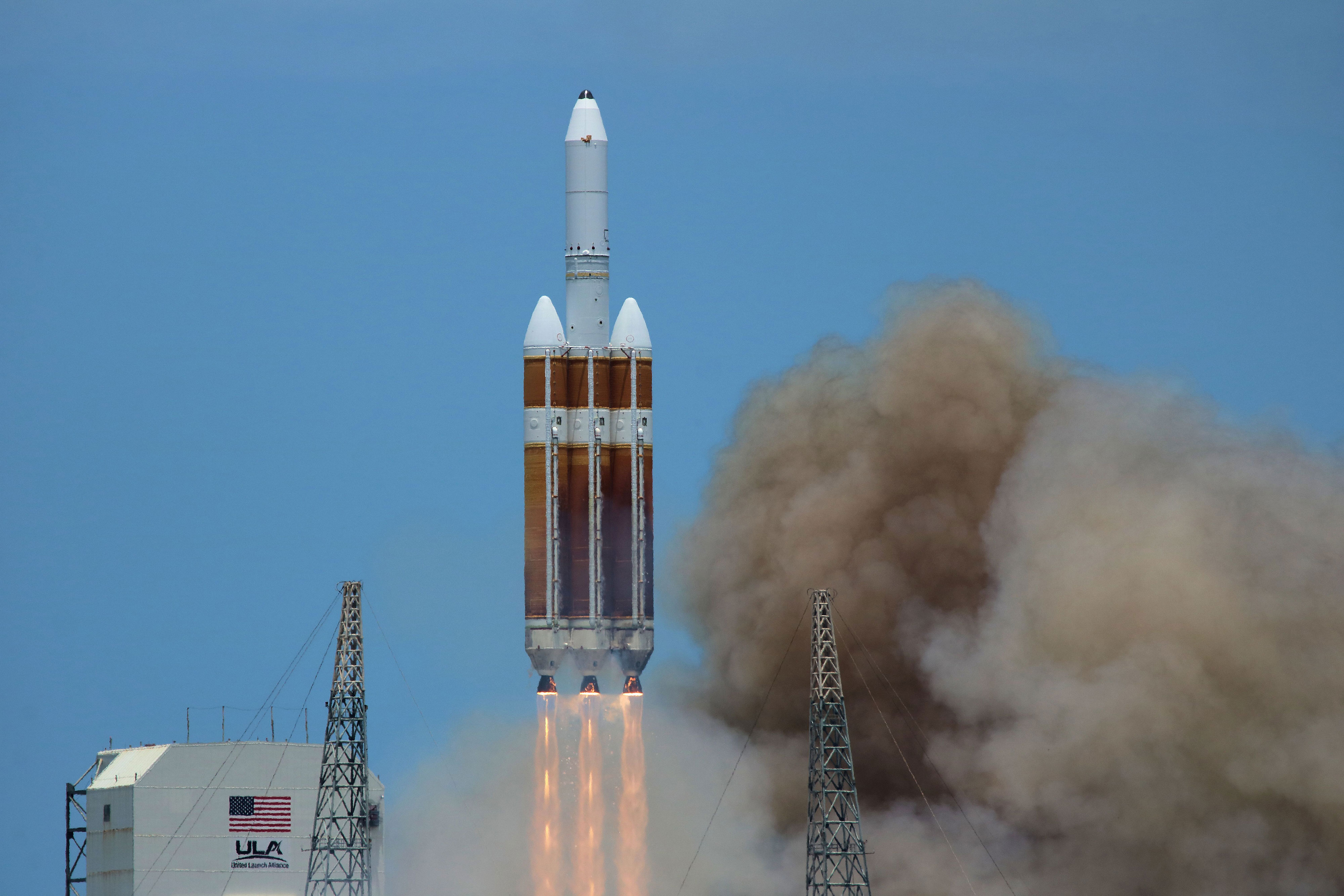 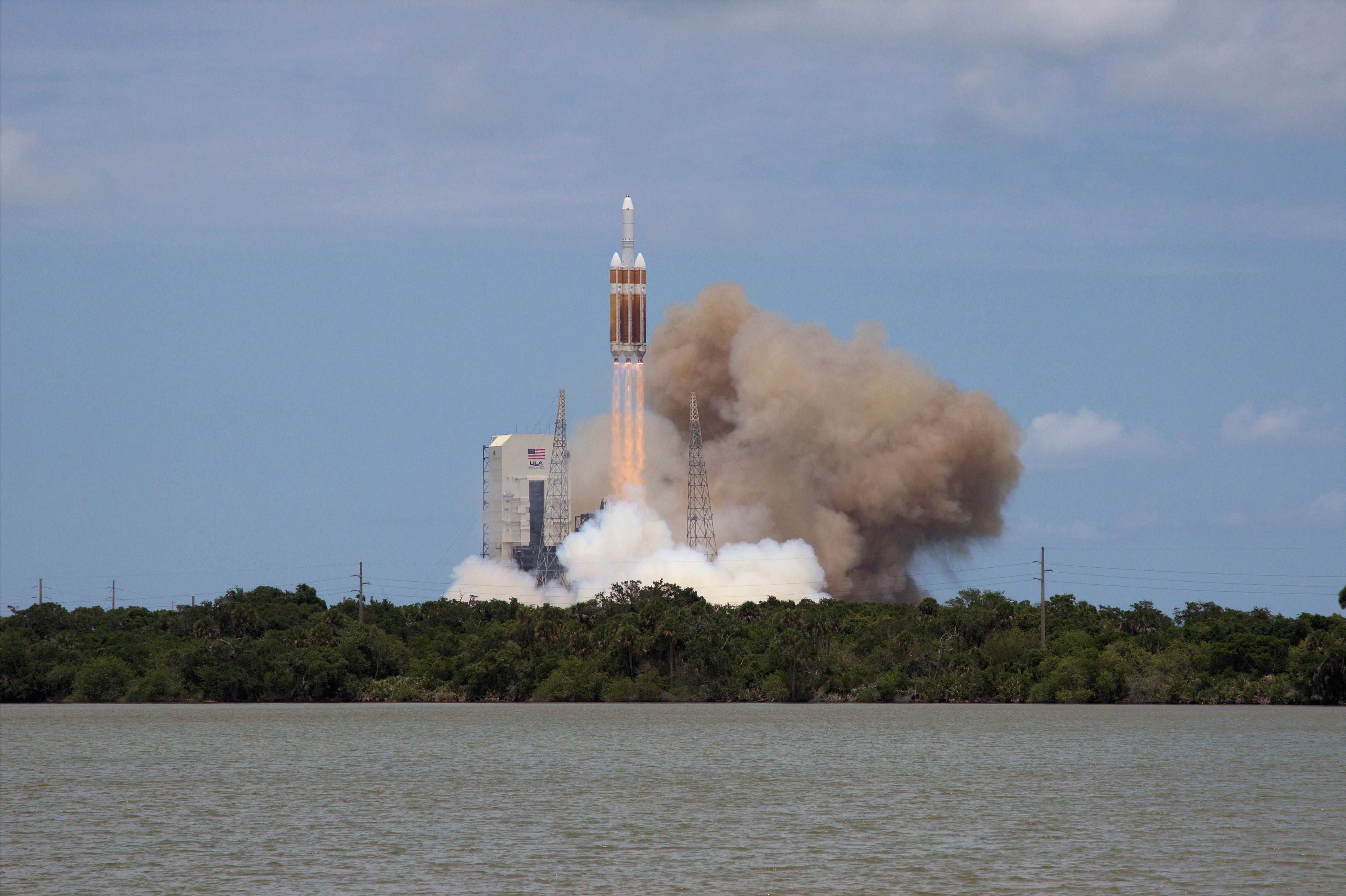 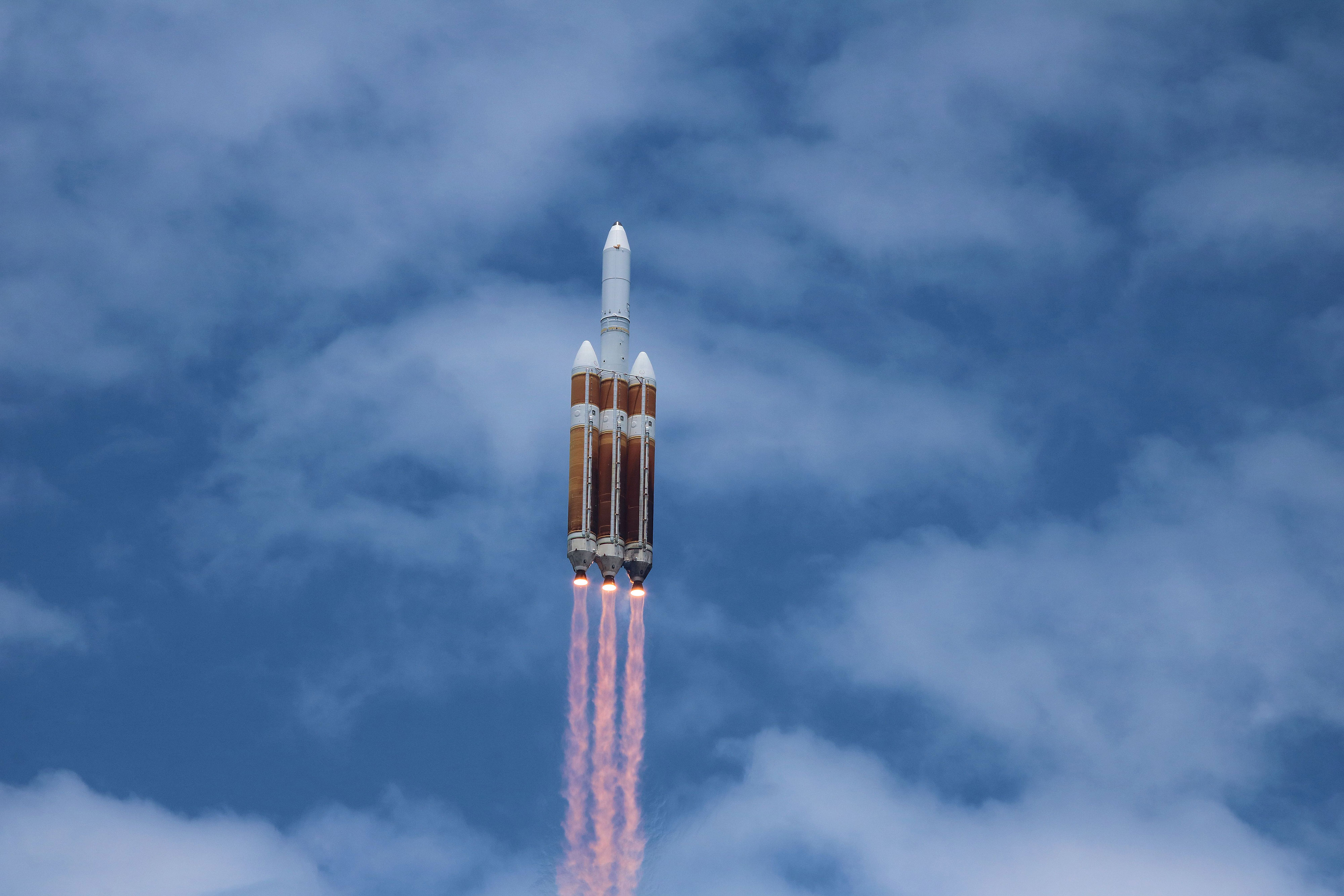 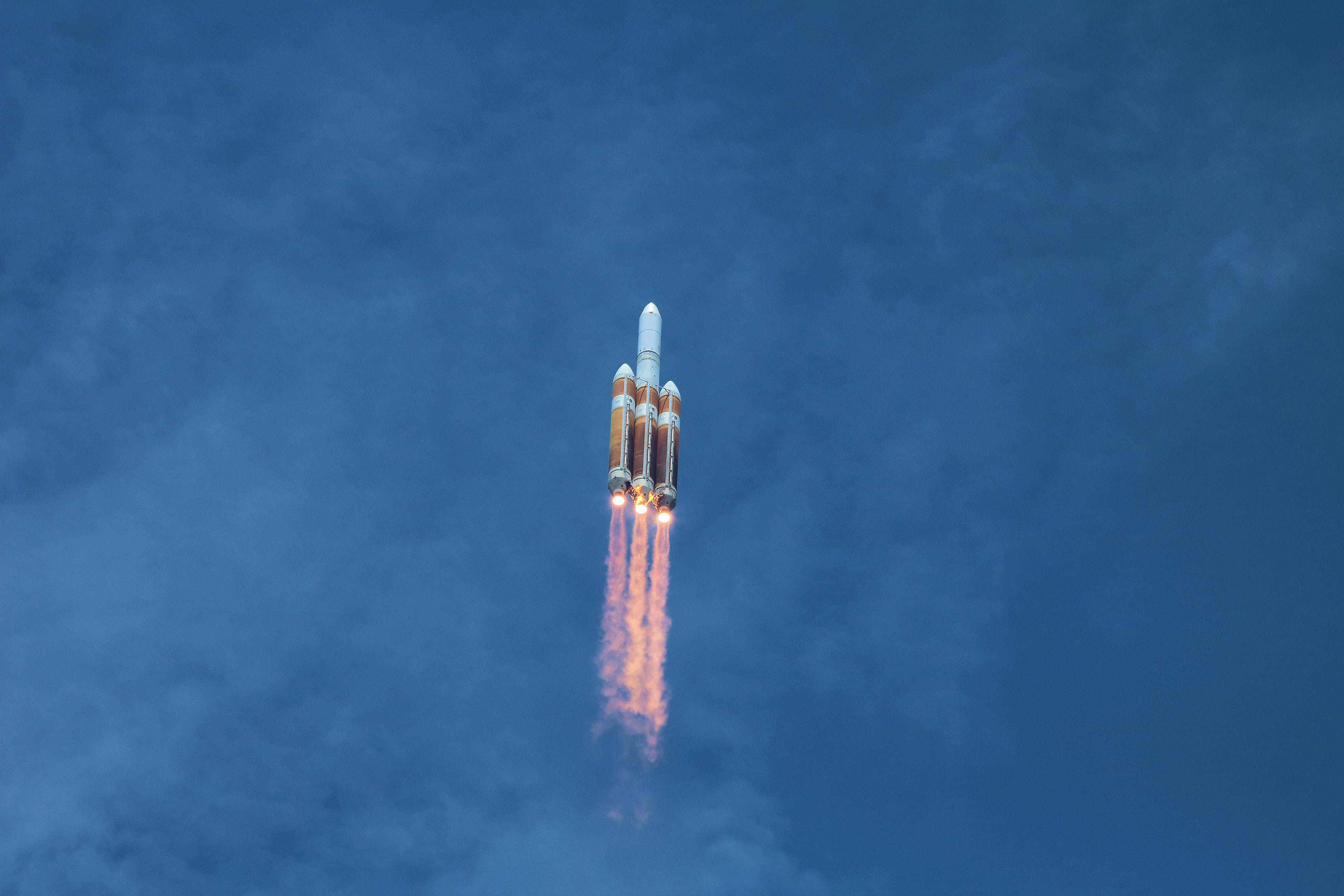 Previous Discovery: A look back at the workhorse of the Space Shuttle fleet

Next Your ticket to space awaits at the KSC Visitor Complex