“Six days ago, astronaut Mark Watney became one of the first people to walk on Mars. Now, he’s sure he’ll be the first person to die there.”

Such is the opening to the description of Andy Weir’s book The Martian. A book that has come all the way from Weir posting chapters for free on his website in 2011, to being picked up by a major publisher and topping the New York Times Best Seller List. Now the book has been turned into a motion picture and is earning rave reviews just like the book upon which it is based.

The book has become nearly required reading for NASA astronauts, engineers, scientists and others working for the space agency. It is being hailed as a potential ignitor of STEM education and renewed interest by the general public in space exploration. Lofty expectations indeed for a book that relies on science fact as opposed to science fiction.

We recently had the opportunity to ask the author a few questions about the book and his experiences since then. As well as learn a couple of details about his next book.

RocketSTEM: I understand that most of your professional career has been as a computer programmer.  How does a programmer get interested in designing Mars missions?

Andy WEIR: “I’ve just had a lifelong love of space and the space program. It’s not really surprising, right? A nerd who’s interested in space?”

RS: Your book had an unusual journey from concept to being picked up by a major publisher. How did the book come about?

WEIR: “Originally the book was just a serial I posted a chapter at a time to my website. Once the book was done, people started requesting that I make an e-book version so they didn’t have to read it in a web browser. So I did and posted it to my site. Then other people emailed saying they want to read the e-book, but they aren’t technically savvy and don’t know how to download a file from the internet and put it on their e-reader. They requested I make a Kindle version they could just get through Amazon. So I did that as well. I set the price at Amazon’s minimum allowable price of $0.99. More people bought the book from Amazon than downloaded it for free from my website. Amazon has a truly amazing reach into the readership market.

“The book sold very well and made its way up various top-seller lists on Amazon. That got the attention of Julian Pavia at Crown. He told his colleague David Fugate (a literary agent) about it. David ended up becoming my agent and Julian offered me a book deal. It was a whirlwind of activity because 20th Century Fox optioned the movie rights that same week.”

RS: The book is a very intimate look at the main character Mark Watney.  In what ways does Andy Weir come out in Mark Watney?  In what key ways are you different?

WEIR: “Mark is based on my own personality. Though he’s smarter and braver than I am and he doesn’t have my flaws. I guess he’s what I wish I were like.”

RS: One of the key things Watney needs to do to survive is grow food – why potatoes?

WEIR: “Watney had very limited space to work with inside the Hab. My research showed that potatoes have (by far) the highest calorie yield per land area of any crop.”

RS: Did you have to take any liberties with the science when writing the novel?

WEIR: “Yes. The atmosphere of Mars is only about 1/200th the density of Earth’s. It does get 150km/h windstorms, but the inertia from the thin atmosphere is so small it would feel like a gentle breeze. So there’s just no way a storm could do that kind of damage. I knew this at the time I wrote it. I had an alternate beginning worked out where an MAV engine test causes an explosion that leads to all the problems, but it just wasn’t as cool. The Martian is a man-vs-nature story and I wanted nature to get the first punch in.”

RS: The Martian has the potential to help ignite an interest in STEM once again. Have you heard of schools using your book in the classroom, and if so, how are they utilizing it?

WEIR: “Yes, I get many emails from teachers who use the book as a teaching aide. The main problem is the profanity in it. Some teachers decide that’s not a problem, while others care about it greatly. Random House considered a YA edition (basically the same as the current version, but with softer words in place of the profanity) but decided against it. It’s a nightmare for a publisher to manage multiple versions of a title. Retailers order the wrong version, reviewers review version A but post the review for version B, etc. It creates brand confusion across the board.”

RS: It seems as though you’ve gotten to meet a lot of ‘well known’ people as a result of the book and upcoming movie – any highlights?

WEIR: “I’ve gotten to meet a bunch of famous people over the past several months. But probably the biggest thrill was meeting Buzz Aldrin.”

RS: How much of a surprise and an honor is it for you that your novel has almost become a must-read book for everyone at NASA – astronauts, engineers, flight directors and scientists?

WEIR: “It’s astounding. I never imagined something like that would happen in my wildest dreams.”

RS: I saw several pictures of you at ComicCon this year plus the panel you were on with NASA.  Did people (the public) recognize you and what was your interaction with them like?

WEIR: “For the most part people don’t recognize me. Though I have had the occasional fan request an autograph while I’m at a restaurant or whatnot. It’s very rare. People don’t usually know what the writer of a book looks like.”

RS: Have you ever worked on any aspect of a real space mission?  If so, what? If not, would you want to? Why/Why not?

WEIR: “No, I never have. I’d love to be a flight controller in the Mission Control Center. With my skillset I’d probably be best suited for the PLUTO station, which manages the scientific (non-flight related) computers on the space station.”

RS: I personally thought the book ended a little abruptly, I’d love to have read an epilog.  Will we ever find out what happens in the future of this world? In your mind do the Ares missions to Mars continue?

WEIR: “Not really. When I end a story, I don’t think about what happens next. That’s up to the reader to imagine.”

RS: What books and/or movies inspired you when you were younger (middle/high school)?

WEIR: “Tunnel in the Sky (Robert A. Heinlein), Caves of Steel (Isaac Asimov), and Rendezvous with Rama (Arthur C. Clarke) to name a few. As for movies, I’d say Apollo 13 is the biggest inspiration for The Martian.”

RS: When you were middle/high school what did you want to be when you grew up?

WEIR: “A writer. But when the time came to choose a career, I wasn’t willing to risk the financial uncertainty of being a writer, so I went into computer programming. I really enjoyed being a computer programmer, so it’s not like that was any kind of defeat or compromise.”

RS: What books are on your reading list today?

WEIR: “I’m currently reading The Bone Clocks by David Mitchell. Next on the list is Quantum Physics for Dummies. Yes, really. It bugs me how little I know about quantum physics so I want to learn more about it.”

RS: What’s in the near future for Andy Weir? Since these questions are being formulated just a few weeks before the movie comes out, I imagine you’re pretty busy promoting the movie, but in general are you a full time author these days or do you still work as a programmer?

WEIR: “I’m writing full-time now. I quit my day job a year and a half ago. I’m working on my next book now. It’s a more traditional sci-fi novel with aliens, faster-than-light travel, etc. It’s tentatively titled “Zhek”.”

This interview was conducted by Emory Stagmer. 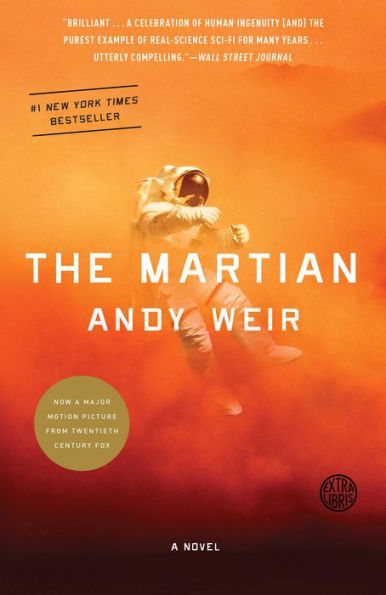 Many weeks ago I agreed to write a review for The Martian by Andy Weir. It seemed like a good idea because I loved the book and wanted to share the thrill of reading it with others. But then I realized I had never written a book review and had no idea how to start. After visiting my favorite writing website, Purdue OWL, to find out what goes in a book review I headed over to Amazon to read a few reviews of The Martian. And then I froze – I had nothing new to say. I had no criticisms. I didn’t know how to analyze writing style and character development. I tried to think of an interesting angle, tried to come up with an erudite thesis, but everything I attempted fell flat.

As I spent more and more time on a fall space development conference, Gateway to Space, as conference chair my commitment to writing the review was forgotten and replaced with finding speakers, marketing the event, and planning the agenda and menus.

Then the movie came out and my husband and I eagerly attended opening night. Now the time for writing the review had finally come. I still don’t have an interesting angle or an erudite thesis but I do have two important things to say about The Martian.

If you love space exploration as I do, this book and movie is the best thing ever! I felt like I was on Mars with Mark Watney, and of course, I want to be there. If you love NASA, and the people of NASA, as I do, you will be pleased that NASA, and JPL, in particular, look amazingly smart, hardworking, and passionate about space exploration. My husband commented, “Well, that was a great commercial for NASA.” If you love science, math, engineering, and problem-solving as I do you will delight in how Mark stays alive for years by “science-ing the hell” out of things.

If you don’t love space exploration and NASA as I do, I encourage you to read the book and see the movie. I think you will find a new love – a passion for space and those who pursue the dream of exploration.

PS. If you are a botanist – read/go and be proud!

This review was written by Christine Nobbe.

Previous Methane in the membrane (Producing rocket fuel on Mars)

Next Discovery: A look back at the workhorse of the Space Shuttle fleet 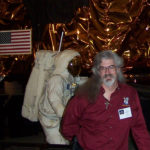 Scientists on their favorite science fiction