• Apoapsis Delta V Burn: The rocket firing at the highest point of a Transfer Orbit.

• Periapsis Delta V Burn: The rocket firing at the lowest point of a Transfer Orbit.

Getting from one orbital altitude to another not only takes delta v, it also takes time. It isn’t as simple as aiming yourself and firing your rocket. Orbital mechanics is a ballet in space, where the lower your orbit the faster you go, and vise versa.

Any change in orbital velocity and you wind up in an elliptically-shaped orbit, instead of the fairly stable circular orbit. 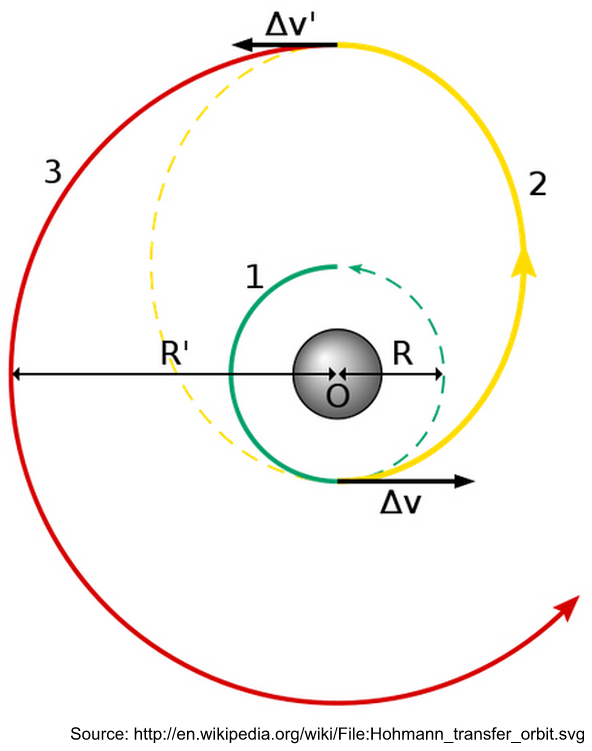 To get from one orbit to another, we must push ourselves off, and then brake when we get there. We coast in between these two maneuvers. We can calculate how much time we will coast from one point in space to another.

The equation to calculate the transfer time from one orbital altitude to another is given by one of the Hohmann Transfer Orbit Equations:

• Ts is Transfer Time in seconds

• r1 is the smaller orbital radius

• r2 is the larger orbital radius

The number π (pi) is involved in the equation because we are actually going around in circles.

Let’s suppose you want to go from the Hubble Space Telescope (HST) to the International Space Station (ISS). How long would it take to get there?

Plugging everything in the equation, we get 2,673 seconds of transfer time. If we divide that by sixty (seconds per minute) we get 44.55 minutes.

It takes about half an orbit to transfer between two orbital altitudes that are not that far apart.

Next Delta V and the GRAVITY of the situation